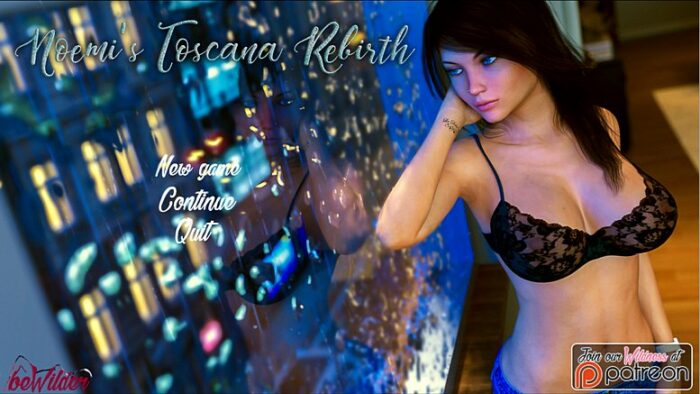 About game:
Our heroine Noemi is the only child of an Italian immigrant to the United States, who is also an entrepreneur and chef. She runs her own restaurant in a small suburb of Philadelphia with her fiancé Brad and waitresses who are like sisters to her. Life was good for her, too good. It all crumbles around her as her father goes to the grave and his secret debts are revealed. As his only heir, she inherits these debts and takes on the burden of a 6-figure debt…

+ Changelog
v0.18
– Content
⦁ 3 Full Scenes (for 79 Total).
⦁ 63 New Scene Rendered CGs (for 1177 Total)
⦁ Added 15 new days to the playable game time for True Mode (now up until the start of Day 299 / Month 10 Day 30 – Saturday)
⦁ 18 Completely New Gameplay Rendered CGs (for 218 Total)
– 12 New Outcomes for the Restaurant Manager section, 1 Lv1 set for each girl in Promo (Proactive/Attack Sal), and 1 Lv3 set for both Waitressing (second set) and Entertainment (debut set), again for all girls. That’s 3 each for Noe, Kriem, Frankie and Kelsey once again. See the Nerve UI on Sal’s side of the street for unlocking details on these and all job sets.
– 6 New Team Bonding Outcomes for the Downtime section, once again 1 each for Yoga (Kelsey’s Competitive) Park (Kriem’s Open Mind), Poker (Kriem’s Competitive), TV Binge (Frankie’s Open Mind), Visiting (Frankie’s Romance) and Car Washing (Kelsey’s Romance). These Outcomes bring all of these activities’ chains, and every currently available activity + mode to their 4th links.
⦁ ~23,500 New Words of Text and Dialogue
– Features
⦁ Continuation of the Sal arc, it’s third time as the major focus and the fourth arc to be majorly developed, now up to 11 scenes total and growing. These scenes are now split over 2 distinct and mutually exclusive paths, meaning two paths of 10 scenes each (9 in common). From here, these paths will further diverge with time.
⦁ The pick-up and continuation of Frankie’s arc as it becomes the secondary focus. This side character’s personal story arc now reaches a 3rd scene as we begin to build out world and people around Noemi, as well as the tactical gameplay more with new content incentives.
Reminder! To unlock Frankie arc scenes you must use her to earn her own tips via the Waitress task during the Restaurant Manager sections!
⦁ Expansion of the Restaurant Manager section with new gameplays, including the first set of unlockable Lv3’s for the Entertainment job. These outcomes are a new level of booster, with better tip bonuses and more stress reduction possible. Best of all, they are sexier to see, and the sexiest of the Entertain tasks attainable so far! Also included are the second (and so far final) Lv3 set of Waitress tasks as well, meaning higher tip days are even more likely (as much as 33% chance per day once unlocked!). Also added are new Lv1 Promo task outcomes for attacking Sal, unlocked on game start. The Nerve Unlock UI has been updated to reflect these updates.
⦁ A completely rebuilt game core to handle the storage, loading, and display of CG images (both Scene CG and Gameplay Outcomes) to pre-empt a now known bug within the Unity Engine that affects games of 4 GBs or more. This means CGs are more dynamically loaded as the game is running, which in turn may mean some longer load times in some cases. Please understand just how important and deep reaching this change is, and so we may experience growing pains with the next few versions. Better it’s done now than later when it’s forces on us however.
– Community Feedback
⦁ A further rebalanced game from top to bottom, using first hand play experience and players feedback both. We’ve made a number of small tweaks and changes for this version, the most notable of which are focused around the Entertain daily task. As of now:
– Each point in Open Mind now adds +$1 to the day’s tips to a max for 20 points, on top of each outcome’s range of gains for the day. This is up form +$1 for every 2 points, making it x2 an effective bonus, as well as making each and every point upgrade in a girl’s Open Mind worth something at last. Stress Point reduction is untouched a -1 Stress for each other working girl per 4 points of Open Mind.
– The ranges of Stress Relief for Entertain outcomes for both Reactive Fails (Defending a non-existent trap) and for Sal’s Trap hits have both been reduced to better balance their effects as they were too liberal compared to Good Outcomes.
⦁ We’ve updated the previous version’s headline scene “Let’s Make a Deal” (Sal’s Scene #9) with improved texts, both to fix typos and improve some elements of phrasing and description. All-in-all we’ve updated several dozen nodes in part or fully for a better scene. Thanks to Zhuang Zi Hu Die for the help with this.
⦁ We’ve fixed a small but slightly annoying issue in the Day Planner where the button label was too short on some screen sizes, making the text wrap the last letter below the button itself. This small touch should better reflect a more professional product now. Please let us know if it persists, won’t you? Thanks to Art for reporting this!
⦁ As always, we’ve taken more passes on scenes to update and fix typos sent in by players. We’ve fixed anther scene or two of mismatched portraits for Noe’s tank top vs bolero in the early game. Thanks for the notice to a number guys and gals!

⦁ We’ve updated a Frankie promo (Proactive Good #1) outcome to reflect the correct outfit portrait.
– Known Issues
⦁ There is an issue with Mac OS’s Catalina which is not addressable by us on the developer side, but can be worked around on the user’s end. “Problem is specifically with the guardian system that won’t let un-noterized applications run on Catalina. The solution is to chmod -R 777 “/appdirectory/” from the terminal as the application did not have the executable flag set. (Example: chmod -R 777 ~/Desktop/NoemisToscanaRebirth_v0_17_Mac). After this guardian catches it and control clicking on the app lets it be opened.” Repeat: Then you’ve got to CONTROL+Click (not double click like normal). That should allow the app package to run, if not, please tell us!
⦁ A few versions ago, we altered the way in which Repeat scenes are found and loaded in the Downtime section, as we eliminated a bug that allowed the game to skip over the next outcome in the activity chain if you already met the conditions for later ones. This means now players will see them in order as they should, however it may also mean that occasionally you will see the current repeatable 1 extra time more than needed if you increase the corresponding stats via scenes. It is a minor nuisance, but one we will look to correct in the future. For now, you may see a handful of repeatable 2-3 times instead of 1-2, rather than skip any.

v0.16
Almost all the new things to tastes come under the Deli roof this time, and as Noe’s feud with Sal steps up to “ridiculous but great fun” phase, we are left with an evil smiling and a hunger for more!

v0.15
– 4 New Scenes, 3 for Asana (2 of them x-rated), 1 for Sal.
– 12 New Gameplay Additions on the Waitress task. 1 new slate of sexy twists on the recently added traps that see Alice and Beth get into trouble thanks to each of the Little Toscana women. 1 new slate of Reactive guarding outcomes for when traps don’t spring, but they are more rewarding than the current crop in that category. Lastly 1 new slate of overt sexy, shamelessness and touching as the girls get Proactive in the hunt for tips, Reputation be damned!
– Rebalanced Nerve system for driving the Restaurant Manager outcome unlocks, some quality of life UI improvements and some rebalanced gameplay values for higher base earnings and rounder multiplier stacks.

v0.14
– 5 New Scenes, 3 for Asana (1-2 of them x-rated), 2 for Sal.
– 4 New Gameplay Additions, 1 new slate of tougher, sexier and more headbutting traps for the Waitress task. Each girl get’s their own new trap to put their foot in when Little Toscana’s Rep is in the middle+ ranges.
– Lower level trap rebalances on Rep damage (moderately nerfed). Slightly easier Asana scene unlocks for her sexiest scene of the last version. We’re also keeping the lesser compression settings for at least another version.

v0.13
4 New Scenes, 1 of them x-rated, all of them for Asana. Almost 20% increases CG count to cover the last half-content version too.
No new gameplay additions, instead a focus on balancing and extending scenes.
Largely reduced image compression for Scene CGs, with the intention of a higher quality art experience.

v0.4 The Team Woes and Grows
Noemi’s wild ride is beginning to heat up! Her romance is blooming to some, but is on the rocks for others, her plans are in motion and her whole world has gotten bigger! But all is not festivities and fun times this season, as her most hated rival is on the hunt, and now he’s not taking her so lightly. Sal’s ready to exert his influence through daily sabotage and his underhanded tricks… all of which should be worth seeing! Can Noe hold him back another version? Will the refined help of a certain lady mature be the difference maker?

v0.2
– Technical information
⦁ Version: 0.2 (‘Things Can Only Get Better’ Release)
⦁ Weight: 511 MB
⦁ Weight Packed: 199 MB
– Content
⦁ 5 Full Scenes (for 10 Total).
⦁ 58 New Scene Rendered CGs (for 144 Total)
⦁ 9 New Gameplay Rendered CGs in Noemi’s Toscana Rebirth
⦁ Added 6 new days to the playable game time (now up until the end of Day 13)
⦁ New Downtime Activities: Yoga and Park Walking.
⦁ 2 New Permanent Outfits for Noe: Simple Gym Gear and Everyday Nightwear, 1 New Permanent Outfit for Kriem: ‘Little Toscana’ Uniform.
– Features
⦁ Enhanced Gameplay Loop, now with initial Day Off / Downtime Activities System.
⦁ Continuation of the Main Story arc and introduction of the Sal, Asana and Damon arcs.
⦁ First playable beta test (“Bare Bones version”) of the new Restaurant Management gameplay, a new system of daily job-based activities for the ‘Little Toscana’ staff. Added Kriem as a controllable / directable character during management segments.
– Bug Fixes
⦁ The daily Management game play menu has been reworked to clean up some character displays. We also fixed the issue with switching back to Noe locking Kriem into Day off activity, which shouldn’t happen anymore. Thanks to Art for reporting!
– Known Issues
⦁ Thanks to the new gameplay system, new variables had to be made and used to control the game loop. As such, old saves from v0.1 are unlikely to work correctly going forwards. We strongly recommend starting a new game, and we apologize for the necessary but still inconvenient issue. Thanks for understanding!
⦁ Issues with File Protection on Mac OS means that save files are not being created, which means the game can’t be saved. We are investigating the issue, but for now Mac builds will be postponed until fixed. Thanks again to Art for reporting and in helping playtest fixes!
So that’s it! We hope you enjoy another taste of Noemi, as her struggles are coming back up soon. But first, some more Nat before the week is over! Until we see them both…