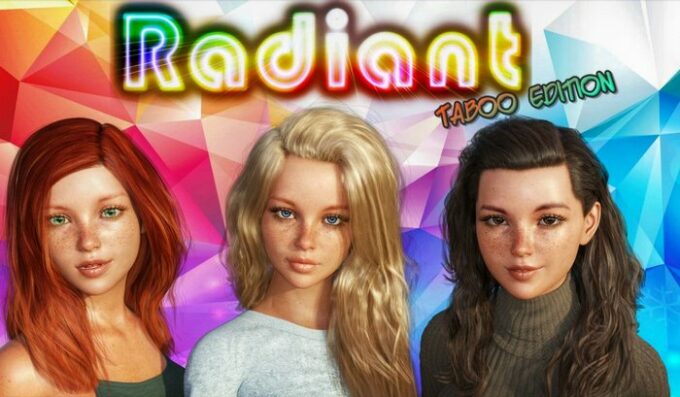 About game:
Radiant is an ‘cest harem game in the genre of romance, slice-of-life, comedy, & good old family drama. Gameplay designed by Sir Dammed, who makes choice-driven, story focused visual novels with multiple paths, relationships, consequences, and future endings. Every decision you make in this game carries weight and changes your experience throughout your play-through… giving you a ton of control over what happens & lots of replayability.

You’re a normal guy who shares an amazing night with the girl of his dreams: arguably the most attractive girl in town. But after being chased out by her unhinged father things take a tragic turn… leaving you in a coma for close to a decade and wiping much of your memory – including your memory of that fateful night. After several years of rehabilitation life eventually returns to normal… but lewd dreams of a girl you have no memory of haunt you… that is until one day when three spitting images of this “dream girl” show up at your doorstep… and they’re your… your…

v0.3.1
The “final” build for Chapter 3.
Fixes the vast majority of bugs or errors.
Many new, fixed, and improved dialogues.
Adds or fixes several renders.

v0.3.1
• The “final” build for Chapter 3.
• Fixes the vast majority of bugs or errors.
• Many new, fixed, and improved dialogues.
• Adds or fixes several renders.

Known Bugs (Android only): If you’re on Maddie’s Dark Path and you choose “Let’s Do This” when standing outside the shower, the shower sound effect/music will continue playing. Roll back and choose something else other than “Let’s Do This” to prevent this.

Update recommended but NOT required. This does not advance the core story.

v0.1.1
– Changed “Over ten years ago” to “About [vari+1] years ago”
– Added a screen that says “Several years later” just after the time-jump
– Fixed the age-variable glitch that was occurring for some players
– Limited the “Say Something Else” player input to a single line

+ NOTE
Several years have passed since the coma, as is repeated numerous times in the script.*
Also: 1: Statute of limitations. 2: Triplets can have different hair colors. 3: They are referred to as *twins* when addressed in pairs of two. 4: The timeline is NOT explicitly set in the current year. 5: Please refrain from Sherlock Holmesing about the origin of simps and smartphones. We’re all aware. We were there.