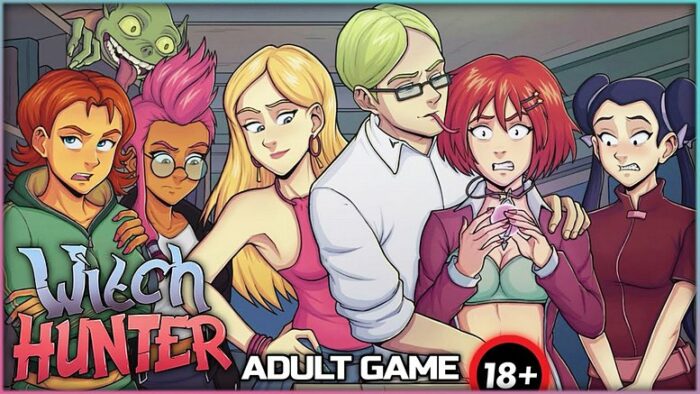 About game:
Witch Hunter will be a visual novel built on the RenPy engine with a variety of gameplay elements, mini-games and multiple endings.
The main character is Lord Cedrick acts disguised as Rick Hoffman (local librarian). By order of Phobos’ He’s trying to find a successor to the throne, and to weaken the cohesion of the witchs.The game will contain a plurality of NSWF images with the ability to fuck each of the witches, as well as many minor characters of the animated series.​..

+ Changelog
v0.16.1
– Fixed an error when starting the game if Cyrillic characters were present in the user name.
– Fixed when when buying chocolates in the store, the game additionally offered to buy a teddy Totoro.
– Fixed notifications hanging when scrolling the game back and forth. (roll back and forward)
– Improved reporting system. There is a limit in reports. Added new fields for saving reports.

v0.16
– Added a continuation of the storyline with Will and Susan (With several choices, depending on which the resulting scenes will differ)
– Added about 15 NSFW scenes (2 of which are animated).
– Added animation for the old NSFW scene with Taranee (under the table)
– Added about 12 story scenes
– Added a new character (one of the soldiers of Prince Phobos)
– Added sprite with new clothes (bathing suit) for Will
– Added a sprite with new clothes (bathing suit) for Susan
– Added a sprite with new clothes (WITCH uniform) for Taranee
– Added a sprite with new clothes (WITCH uniform) for Irma
– Added a new page to the adult magazine (in the bookstore)
– Added 4 new backgrounds
– Added two sprites for fighting (Taranee and Irma in the form of WITCH)
– Added three new items in Witch Hunter
– Added a new player notification system. Notifications will appear when earning money or gold, receiving, buying, selling, losing, crafting or using items and other situations in the game.
– Added a reporting system that will help the developer calculate and correct errors in the game. Detailed information on how to use this system can be found in the game by reading the instructions.
– The combat system has a functionality with which two opponents can participate against a player.
– Fixed the name “Blank” to “Blunk” in English
– Now you can’t write or call on the phone if Cedric is on the Meridian.
– The correct answer to the question “What is the basis of the Latin alphabet?” has been corrected in the history textbook.
– Now Elion is marked for a quest where you need to cheer her up.
– Now the player has highlighted the way to get the Larvec Fang.
– To make it easier for the player to understand where and how to raise the knowledge of history, the book
on the table will be highlighted with an exclamation mark at the right moment.
– Fixed the moment when Cedric didn’t have enough money for an Aphrodisiac for Elion, then there was an opportunity to go through the content further, and it also caused an error that could be ignored.
– Other minor fixes

v0.15.2.0
– Fixed animation with Susan in the new update (added anti-aliasing)
– Fixed a problem when the android version had a black screen instead of images from the new update
We also made a mistake with the work of saves in version 0.15.0.3. What is the problem with Saving from 0.14 does not work correctly in 0.15.0.3. And also saving from 0.15.0.3 does not work correctly in subsequent versions.

v0.15.0.3
– Added a new storyline with Will and Susan (With several choices, depending on which the resulting scenes will differ)
– Added about 11 NSFW scenes (2 of which are animated).
– Added animation for the old NSFW scene with Irma (in the toilet)
– Added about 13 story scenes
– Added a sprite with new clothes for Will
– Added a new page to the adult magazine (in the bookstore)
– Added two dialogs in phone messages
– Added the ability to view images in phone messages
– Preloading of the action has been added. Preloading can be turned off in the settings, called “Wait for the battle to load”. If you turn off the setting, then for some time after the start of the fight, you may experience some braking animations.
– A “Hide” button has been added to the dialogs to hide the interface
– The “Auto” button has been added on mobile devices to automatically skip dialogs.
– In the future, you will be able to find out about the available new update via the main menu. This function works only when the Internet is turned on.
– Added an intermediate message with a black screen “After some time in the bookstore” between quests in the bookshop. What this means: The player could and still can activate several quests in the bookshop. Previously, the dialogues of these quests could follow each other. This turn of dialogues caused the feeling that the characters allegedly forgot what had just happened and abruptly changed their mood.
– Added animations to quest markers
– Now Cornelia can call you, not only when you are in bookshop, but also on the map
– Fixed image smoothing in some animations, thanks to this, animations look clearer and without the staircase effect
– Now the default language in the game is set depending on the installed language in the system, that is, Russian or English. If you have a language installed on your operating system that the game does not support, then English will be installed in the game by default.
– Improved the appearance of the save file menu
– In the mini-game of the bookstore, the ability to move to the shelves during dialogues or when Cedric picks up a weapon has been removed.
– Fixed a typo in the quest where it was said that it was necessary to increase the depravity of Elyon to 6, instead of 7.
– Fixed looping of the quest with the form of a maid for Elyon, previously this quest was started over again if the player performed a certain action with Elyon again.
– Fixed some spelling mistakes in Russian and English.
– In the galleries, the scene with Elyon on the stairs was duplicated twice.
– When pressing the Sleep button, the music in the bookshop now fades smoothly.
– Now, the announcement of the disappearance of Brian and Alchemy on the wall of the store appears after they disappeared.
– Fixed micro pauses between switching animations in the action.
– It was possible to minimize fragments of animations in the action, when one of the animations did not have time to end before a new animation began.
– The day was coming, after spending an evening of readings with Elion in pajamas.
– Now you can skip the credits.
– Fixed the Skip button for Miranda and Reitor, now the button will not move you to the bookshop.
– Earlier, when opening a magazine page, the sprite did not disappear as Cedrick holds a closed magazine.
– In one of the animated scenes with Elyon, Cedrick’s shirt was displayed incorrectly at the edge of the screen.
– Elyon statistics were displayed in Russian, regardless of the configured language in the game.
– The interface no longer disappears for a few seconds if you move from location to location

v0.14
Hello, everyone, happy holidays past and coming. A new version of Witch Hunter will be released one of these days, in connection with these I am writing a list of changes and innovations of the new version.
— Added a new storyline with Elion Brown (which is a modified old version of the storyline with Elion and replaces the current storyline with Elion).
— Added about 10 NSWF scenes (two of which are animated)
— Added 6 story scenes
— Added two new costumes for Elion
— Added three new characters with sprites (Uriah and Elion’s parents with two variations of sprites)
— Added 2 new backgrounds
— Various actions with Elion have been returned, modified and redrawn (some of which are NSWF)
— Many errors in the logic of the plot have been fixed
— Added 3 new items
— Some corrections in the dialogues in Russian
— All items now stack in inventory
— Fixed a bug where only an archer appeared in the rebel forest
— Animations in combat scenes were optimized
— Now the quest is an Annual Parents’ Day, and the quests with Hylin and Irma are highlighted on the map
— Implemented a new system of interactions with Elion in bookshop.
— Memory usage has been increased to 1 GB, for systems: Windows, Linux and Darwin
— Added animations of Cornelia in the action movie
— Cedric’s movements have been adjusted after completing certain quests.
— Skip button no longer moves you to bookshop
— The Sleep button is now available only in bookshop
— Other minor minor fixes

v0.13.0
-Added a new plot fork in the story of Taranee about the fate of Nigel
-A new plot fork has been added in the plot with Cornelia and her Sister
– the second plot fork with Alchemy has been completed
-Added a small plot at the end of the Hi Lin branch with Hi Lin’s mom
-Added a small story scene with Miranda during a quest with Hai Lin
-Added small plot edits\changes to the intro of the game
-Also, the plots and dialogues for the Taranee, Irma, Hay Lin and Alchemy branches were partially reworked (many plot holes and inconsistencies were removed)
-Added 8 new NSFW scenes (two of which are animated)
-Added a new sprite (costume) for Cornelia
-Added 1 story scene (with variations) with Cedric
-Some relationships between quests have been changed
-Some corrections were made in the dialogues in Russian
-During the battle, animations of attack, block, damage, skills and effects for Cedric (in the form of a man and in the form of a snake) and an archer appeared.
-The “FPS animations” option has appeared in the game settings. This option allows you to increase or decrease the frames in the battle animations so that the animations do not consume a lot of memory, which can cause friezes on devices with low memory.
-A hint appeared in the dice game, which displays the combination of the player and the enemy.
-Saving previous versions will stop working from version 0.13.0
-Other minor changes

v0.12.0.4
– Added a new storyline related to the Alchemy, the Brothel and Miranda
– Added 10 new NSFW scenes (with many variations)
– Added more than 2 unique story images
– Added five new character sprites (includes costumes for Prince Phobos ‘ Alchemy)
– Added three new characters
– Added 2 new backgrounds
– Added two NSFW pages to the magazine in bookshop
– Added a new monster to the Meridian Forest
– Added about 4 new items
– Added a lot of sounds and music in scenes and places where previously music and sounds were absent
-Some corrections of dialogs in Russian
– It was made so that Commander Reiter’s rebel stripes could be sold with one click
– Other minor minor fixes

v0.11
— Added a new storyline related to Will Wandom and the new character Sondra
— Added 11 new NSFW images (including scenes with Will Wend and Sondra)
— Added more than 25 unique story images
— Added six new character sprites (includes costumes for Will and Sondra)
— Added three new characters (Mr. Barton, Sondra, Matt Olsen)
— Added 6 new backgrounds
— The store now displays the amount of the character’s money, as well as the following buttons: card, bag and phone
— The statistics of money and gold are displayed again in the menu of the mini-game “poker on dice”
— Added some door sounds that were missing earlier
— Some fixes for dialogs in Russian
-The game has moved to the new version of the Ren’Py engine 7.4.2. The new version of the engine no longer works on Windows XP and on 32-bit iOS devices
— Partially fixed English text in the game
— Other minor minor fixes in Witch Hunter