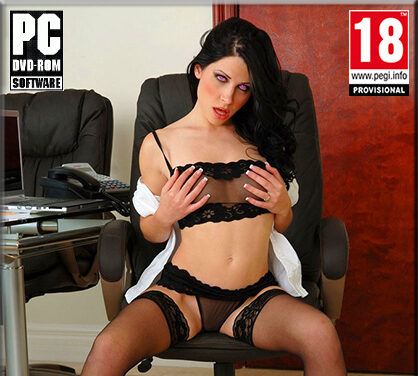 About game:
In the past a cult headed by the Warlock Kurndorf used the “Book of Control” to exert their domination over the town of Glenvale. Kurndorf was killed and the cult disbanded.
Since then the legendary book has become lost, but you are determined to locate it and use it’s power, either to help your family and others, or to gain the power of the spells within the book…

+ Characters in game:
– Yourself – can be either a male or female
– You mother and sister
– Mr Beasley the science teacher
– Sir Roland Gates the secretive and rich owner of a creepy mansion
– Monique the cute librarian
– Ms. Titus the buxom librarian
– Mrs Tess Adams the beautiful clutx
– and others

+ Changelog
A Spell For All 14.11d
Bug Fixes – Some reported bugs were fixed, also a lot of typos. Some passing time problems for Ash, Sharon, Lola, Betty, Melanie, Karma. Some problems with repeat sex with Hannah/Monique
Pregnancy – Doctor Kay and Nurse Sandra now have end game pregnancy events. Nurse Sandra’s can be shown with Nurse Megan if both are charmed. Additionally Lucy (the thrall with Jesse) has an end of game pregnancy event
Dancing – Doctor Kay and Melissa have poledancing scenes (generic text)
Walkthrough – Some fixes
Thralls – Some rearranges for images for Lucy and Seraphina, mainly for future changes. Added an early sighting of Lucy during school hours at the sports fields, before you learn the charm spell.
Endgame Fixes – A number of fixes during the end game, especially with the Severn Valley mod enabled. One image of Tamara Russ (Tammy) was incorrectly used, now a halloween themed one for the original vampire model Madison
Addresses – Added some missing addresses in the phone address book.
Teleports – Some blank buttons fixed on the teleport screen for old saves, and a layout fix.
Homes – A new block of the Celeste apartments opened, South building to compliment the existing North, a few people moved to the south building.
Melissa – Melissa got an apartment in the South building of Celeste Apartments, she works nights so available in the daytime there. Melissa has more variations on sex scene images. She has new scenes for a bath and minor scenes if you are invisible

A Spell For All v14.11c
Fixes
fix some image problems for Aunt Brandi and a hang in Kylies bedroom
fix some incorrect refereces to John Adams
fixed Betty’s recharm scene to remove bit from Ash’s scene
could not teleport invisible properly
some changes to settings like themes (hopefully)
added a fallback for cases of people not getting Mom leaving for work
updated the walkthrough for a reported problem
some low level events and scene rearranged

Changes
John Adams has a new alternate female model from the bologna mod, Corey Chase. Some additional images in his/her office. Some new sex images at the pool, one faked for Brandy Robbins
alternate charm for Mother Superior if you fail to charm her (say leave her room without charming her). Sister Desiree will contact you to start the process. Cheat menu options added for all stages of her charm process
bondage scenes for Sister Desiree part of above but repeatable and available if you charm ‘properly’. Discipline her in Mother Superiors room and then send her back to the Courtyard
also changes to Sister Desiree, you cannot sleep with her until Mother Superior is charmed (with small scene if you try)
altered Sister Desiree’s pool images, different day and night
you can disable non-story SMS messages for any specific character
added more flavour text to some on Aunt Brandi’s post charm scenes. Still fairly simple, with new image for Kylie
one more nun for the cult
added a hint popup when you first visit the Graveyard. Note: it will appear in old saves when you visit the graveyard next

A Spell For All v14.11b
Fixes
– fixes a icon issue in your inventory
– fixes event conflicts with Zoey’s model selection event. Similar fixes for Nurse Megan
– fix a range of typos
– unable to charm Officer Khan at the Gym
– a problem with Ms. Titus poledancing sex scene
– fix some problems with the notes in your phone for consistency and completing some items
– small layout issue in Ms. Titus’s home
– Mother Superior can see you when invisible. Excuse I did a simple deus-ex machina fix, and something in the cloisters disspells the spell, clearly noted in the scenes
– fixes some SMS images not appearing
Small Changes
– Ms Titus can be transformed to a younger version using images from ‘thepledge’
– added a SMS notification from Ms Titus when she can teach you the Possession spell (on the appropriate gender/path case)
– added a simple, repeatable encounter with Ms. Titus at the Gym
– transforming yourself in the Hidden Room has more flexibility, and restores the BE/Cock growth transformation. Also adds a change avatar option (random)

A Spell For All v14.11a
Bug fixes
– fix a case where the ‘peeking’ event for Aunt Brandi did not trigger
– fix a case with old saves where the conversation with Mom to get access to Aunt Brandi’s house did not happen but was effectively ‘in play’
– fix a hang/error entering the Mayor’s Office notably around the press conference
– Charley could not dye her hair brown
– a missing image
– fix some cases where the inventory would not scroll
– fix some icon issues for high resolution displays (hopefully)
– fixed some minor issues when you get Kurndorf’s skull

Small changes
– added a hint/popup when you learn Possession to give a little bit of a guide
– added a little more information when you examine the holy water
– added some more text/hints for ‘The Death of Kurndorf’ and ‘Finding the Water’ books in the History Classroom
– added a fallback alternate charm for Ellie if you miss charming her when the Bank is closed. Once the construction site is available on a weekend Kristin will message you, go to the site and meet/charm Ellie
– a few extra poledance images for Kristin I found
– altered adding items via the Cheat menu to make it easier to add many of them
– added a Speaker app to your phone to suppress the sound effects added in 14.11 (phone/sms noises)

A Spell For All v14.10.1
– Assorted bug fixes and small continuity fixes. Notably some issues for Angelica and some incorrect hyperlinks in the game.
– Add Memory option to phone apps, primarily for Android users, but to allow altering number of saves or photos in your phone
– Schedule tab in phone note for when some people are available. A work in progress
– Vampire Lilith three/foursomes with Mrs Granger/Kate. Images are lower-resolution and Kate is edited in via head-swap edits
– Some events returning to Sarah with the Vampire. Lauren will refuse to be fed on, a bit different between murder and apprentice paths
– Threesomes with Sarah and vampire Lilith. All images edited
– Additional explicit image variants for Sarah (charmed) including strap-on images and a tit-fuck scene.
– Additional image when visiting Alison with Lilith
– Partially updated the walkthough in the game, and removed all except the version created by Capacitor. Altered the display to be in an iFrame to try to address a display issue for an Android device. Can still be opened externally of the game
– Altered some of the text around the start of the Elian events to encourage hydromancy and made learning hydromancy easier. Added an additional vision AFTER Elians related to Jesse/Legion
– swapped an image for Kate

A Spell For All version 14.10
– Optional alternate model for Mrs. Tanika, chosen at first meeting or via cheat menu. Also add a titfuck scene. As part of this also altered how your bedroom is displayed with the different combinations of visitors
– Optional alternate model for Gina, chosen at first encounter or via cheat menu.
– Miss Logan’s Neurology assignment now is an alternate charm path. Will include some changes for Ms Jones (an alternate outfit)
– Sofia on the apprentice path is replaced with a different chauffeur Angelica (model August Taylor) with different story
– New bad ending for Mom/Gabby story written by imperator_mentus
– Series of challenges with Elian, but no final resolution. New bath scene for her after the start of them, and also the pool and poledance scenes can be randomly seen again, with new text and alternate images.
– Updated modding system to make it simpler to mod images or javascript. See Mods/readme.txt
– Altered and added a fallback for Mom to ensure her masturbation scene happens, at worst after Legion is defeated/leaves
– Assorted small bug fixes
– Better support for mobile devices layout. Note: popup inventory was discontinued
– Better handling for alternate images and error handling. Also handles differing aspect ratios better
– Android apk version
– Additional endgame pregnant scenes for Elian, Donna, Pamela, Madison, Zoey, Nina, Hannah and Camryn
– Additional image variations for some minor places like tv viewing, pool, strip-club. Also more image variations for Ms. Jones, Hannah, titfuck scene for Hannah
– Some revisions/clarifications for the notes in your phone
– Stopped some cases where repeat sex made you leave the house/room
– Some changes for Mrs Granger and uncharmed Kate allowing sex with Mrs Granger when Kate is not a lover or girlfriend. Also added for Mrs Granger bondage. strap-on and titfuck scenes and a variant pool scene (video)

A Spell For All version 14.9.4
more bug fixes, notably when studying with Kate and picking the wrong option with puzzles disabled can break her story and cause her to kill you on next meeting at home
– Endgame changes, pregnant scenes for Mayor Thomas, Angela, Emily and Kylie.
– Endgame for family improved and recognises the Mom bad end if she runs away with Gabby
– More pregnant porn in Miss Logan’s PC, 5 images
– Changes submitted by freyjadour to allow multiple transformations (BE + futa for some) and to reverse transformations. Also a PC to male transformation but do not expect people to react to this yet. Also includes extra image edits for be + futa cases
– Alternate pregnant edits for Mom and Tracy submitted by Dirkdingo, they also did the Kylie pregnant edit.
– More obvious event once you can learn trainings
– Replacement charm scene for Jenny from Northwind, a bit ‘dirtier’
– Expanded sex scenes at the restaurant for Jenny from Northwind, also a bit ‘dirtier’
– Additional BE images for Zoey including home (pose, sex, bed), poledancing, pool
– Additional/expanded sex scenes with male Mr Beasley, with variations for futa players. Written by Northwind
– Additional BE images for Madison including pool sex, home strip-tease, bed(ish). Also some head-swap fakes for some strap-on sex scenes. Additionally a pool-side strap-on image. You can now transform her at home.
– Additional BE images for Louise including pool, home, poledance. Thressome scenes with Nina, using model Sonja Adams. You can now transform her at home.
– Additional BE images for Bambi (Kiki Vidis version), pool, hotel bar, guarding, her room
– People reacting to you as a futa, written by Northwind. Not all just a selection so far but notably Mom and Tracy
– Expanded scenes for John and Tess at their home, also by Northwind. Primarily for male John
– Expanded charm scene for John by Northwind
– Revised Silver Ring encounter with Tess and John with other paths possible by Northwind. Note, you can get kicked out and option locked out for Tess. These are for a while, a SMS from Tess will arrive after a time.
– Replaced a look-a-like image for Mrs Granger (male bj in the Wild Ranges)
– Add ‘worship each other’ option for Mother Superior and Sister Desiree, lesbian and futa version. Tweaked one of Sister Desiree’s images to emphasise caning marks
– Kurdorf asks a price to learn Invisibility – take care, a possible bad end if you are lacking two defences
– Performance scene with Jade (night with no scheduled dancer, and have not visited her and dancing allowed)