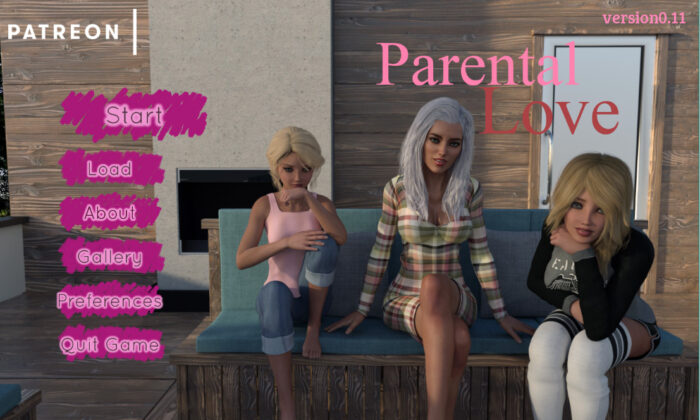 About game:
In Parental love, you take on the role of a father of two who had a falling out with his wife Iris. Due to your cocaine addiction, a while after your second daughter, Ada was born, Iris thought it best you not be around your kids.
You two went through a break up and the court ruled her sole custody of your children
It’s been fifteen years since then and you’ve gone to multiple different rehab programs. Now that you are clean of drugs, You decided to start dating Iris once again. The relationship was online for many months because you live in different states, but now you’ve decided to visit Iris in Ohio. The game begins when you first meet her in a bar.

+ Gameplay
I know this line has lost it’s meaning because of Telltale games, BUT! Every decision you make in this game will affect the future in one way or another. I guarantee, you will not encounter every scene in the game on your first playthrough without some save scumming which I do encourage. The actual gameplay comes down to just making decisions.
Right off the bat you’ll meet your two children Ada and Elly whom you form a Strong bond with.
Other characters you will meet along the way are friends of Ada and Elly. And other men who will try to cuck you. You’re not going to let that happen.
Which brings us to our next topic.

+ Changelog
v1.1
CHANGELOG:
– Added 6 new scenes (see instructions below for how to access new scenes)
– Fixed bug with gallery crashing
– Better scene skipping
– Updated Brazilian Portuguese translation. Thanks Grubb
– Added two new translations
– French by Maxo
– Polish by Bev_
Instructions how to get new scenes:
Alley scene: Happens on the harem route a few days after the tournament, after “the peeing scene” and after the scene where you have sex with Jenna in front of Emily for the first time. Same scene where you confront Eric.
Sofi scene, massause extra, milk drinking: These three scenes happen in quick succession from one another during the epilogue of the harem route BUT KNOW THIS: You need to have Sofi ending + During the massaging scene with the trans girl “24th of May”, you have to give her your number through a newly added dialogue choice.
Jenna scene: This is a new flashback which happens after the Sienna flashback.
F Night scene: This happens “20th of June”. Last scene of the day during which Elly and *** wake you up with breakfast in bed.

v1.00
Made the fifth and final route of the game
Added Brazilian Portuguese translation for all of the game (thanks grubb)
Minor fixes in dialogue
Changed Madison name to Bluehair Mcblueyface
Remade a few of the ESPECIALLY bad renders from when I started using Octane (img3036/img4505/img3531/img3682)
Added achievements to the game and an achievements menu
Made old saves not show up (purposefully because old saves also just wouldn’t work with this version [very well]) / Sidenote: you can go to %APPDATA%/Roaming/RenPy/ParentalLove-1492770962 and delete this folder now as those saves are dead.
Removed version numbers from main menu
Removed the Spanish translation
Heightened the quality of a few renders that I’d previously compressed a bit too much
Added day 8 massage parlor extra scene
Fixed a couple bugs and consistency errors
Removed option to not tell Sofi about Jenna relationship during shopping in day 3, as Sofi needs to know about their relationship at the start of day 8 and I’m too lazy to write in a revelation scene otherwise
Changed the 12 year gap of MC not seeing Emily to 9 years
Changed the characters ages accordingly
Added several new lines to indicate these ages
Removed all lewd Sofi scenes
Added day 3(?) extra wake up scene
Changed/clarified the relationship between Jenna/Damien during scenes where it’s being talked about
Removed the patreon link from the about page and the main menu
Added a new link to main menu in patreon links’ stead

Ways of initiating the fifth route:

v0.99
Finished up the harem route
Added Brazilian Portuguese translation for all of the game (thanks grubb)
Minor fixes in dialogue
Changed Bluehair Mcblueyface name to Madison

v0.16:
Added new story to Harem path
Added Brazilian Portuguese translation for all of the game (thanks grubb)
Minor fixes in dialogue

v0.15:
Added new story to Harem path
Added Brazilian Portuguese translation for all of the game (thanks grubb)
Minor fixes in dialogue
Removed a couple lines of dialogue from day 8 for retcon purposes (nothing too important)
Remade the renders for one scene from… v0.8 i think?? Some shitty lighting ones from when I first started using octane

v0.14
Added new story to Harem path
Added Brazilian Portuguese translation for all of the game (thanks grubb)
Minor fixes in dialogue
The next update is going to be waay bigger than the last few have been. v0.15 Shouldn’t be a monthly release like these past few have been.

v0.13:
Re-re-did the 0.1 renders I re-did in like version zero point something whatever. (the ones at the start)
Finished up the forbidden one route
Added Brazilian Portuguese translation for all of the game (thanks grubb)
Minor fixes in dialogue
Fixed the jump bug from 0.12
Added new gui element to main menu

IMPORTANT: This update only focuses on “The forbidden one” route. Not the Harem route. This update also completely finishes up that route, so now all we’ve got left is the Harem one

v0.12
****IMPORTANT****
Last minute fix here, in certain versions of the game, the game will crash at a point because it can’t find a label called “d9pastadagftalk” you can get around this bug by opening the console either from the button that shows up during the crash, or by pressing the buttons “Shift+O”. Then type this into the console: “jump pastadagftalk” without the quotation marks. Sorry about this, it’ll be fixed in the next update.

v0.11:
– Added last half of day 8 and more to harem route
– Added Brazilian Portuguese translation for half of day 8
– Removed one option from near the end of day 3
– Minor fixes in dialogue from day 8 in Parental Love

Lain's Walkthrough + Scene Gallery Mod
Features:
A full in-game walkthrough for every route in the game! When you start a new game you will be asked which route you would like to play. After choosing a route, whenever an in-game choice appears the mod will automatically highlight the best choice based on the route you chose. Choices that aren’t important and don’t have lasting effects aren’t highlighted so you still have freedom and can pick your preferred choice.

A scene gallery has also been added to the main menu which lets you replay any scene in the game! All the scenes are unlocked by default, meaning you don’t have to play through the game to view the scenes. I’ve also added more frames to some of the animations and animated some scenes that previously had no animation.

Installation:
PC:
Unzip the mod and put the folder named “game” from the mod in your “ParentalLove” folder.