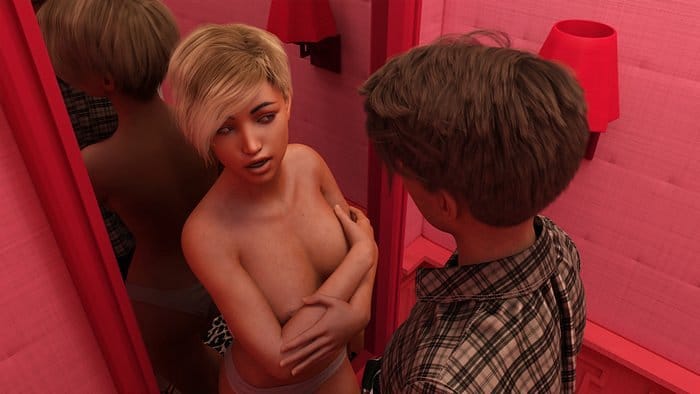 About game:
It’s the beginning of summer. Jack is 18 years old and has just finished high school by graduating. He has a tense relationship with Eve, his “childhood friend” who seems to have disliked him cordially for a few years. Jack’s parents had left town for a week, Eve invites her best friend, Cassie, to join them. They have the house and the pool for them alone. How Jack will handle the situation depends on you.​..

+ Changelog
V0.6.1
Day 6 part 1 content. 50 351 words, 11 249 lines of code, 1060 renders.
The logic of the Moronic Hero and Kelly Path has been corrected. Your saves on this path won’t work properly.
The text has been tweaked to display a more prominent outline. It should now be easier to read.
Hidden choices are now exposed.
Various bugs and typos have been corrected.
You can no longer rename Eve and Cassie.
A few lines of the introduction of Eve, on day one, have been rewritten, to better explain her situation. This will probably need further tweaking.
Added a presplash screen, as the initial loading time can be noticeable.
Added a new title screen.
Several other things I forgot about.

v0.3.5
New GUI. I tried to make something clean and sober while still aiming for a bit of personality.
The gallery. I couldn’t make renpy default gallery system to work properly. So I coded my own. You will have to replay the game to unlock images.
Bug corrections. Some undefined variables are now defined, some badly indented blocks are now in their correct place.
I’ve found and corrected the bug that was preventing me from generating translation files. So I can now seriously think about internationalization. Maybe a french version in a future update?

v0.3
Day 3 content is here. Day 3 consists of 338 new renders and 4450 lines of code and dialogue.
Added an interface to track the girls’ stats points. It’s ugly.
Added several new triggers on Day 1 and Day 2. That means that your previous saved game won’t be compatible with V0.3.
Added some buttons on the main menu.
A “Credits” page now replaces the “About”.

v0.2
It covers the story up to the end of Day 2.
The plot thickens as Jack has to make his first decisive choices which leads to different developments with both Eve and Cassie.
Day 2 contains 234 renders and 3000 + lines of code and dialogue.

v0.1.1
The demo version of the Summer Scent has been updated from v0.1 to v0.1.1 with some dialogue being rewritten and images being compressed.