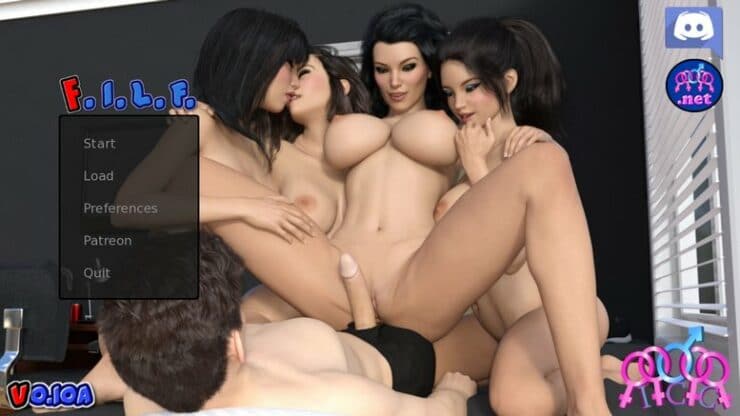 About game:
You the main character come home from a long time away. greeted by your mom and sister you come to find out your aunt and cousin have also moved into town!

+ Changelog
v0.17c
– A secret image selection was layered over another by accident. Fixed
– Fixed a small progress point mistake on Melissa’s side.
– Some small grammar/spelling fixes

v0.17a:
New large multi-part main story scene
New option with Melissa at the Massage Parlor
New option with Aubrey (Roxi) at the Strip Club
New secret photo to find and unlock (two variants)
Re-rendered the Coffee Bar as needed for new imagebuttons
Fixed a few bugs in the gallery and other places

V0.14
– 4 New repeatable scenes for Samantha (One for each part of the day)
– 4 New repeatable scenes for Melissa (One for each part of the day)
– Two new scenes revolving around Diane/Delia. Main story content with hints of what’s to come
– Fixed a bug that let you give Lingerie to Melissa without you even buying it
– Fixed a bug that wouldn’t remove the last ‘Vote Diane’ sign from your inventory
– Fixed a few gallery scene bugs that messed things up when viewing them
– Many Spelling/Grammar mistakes fixed

v0.13.2 includes a few bug fixes. Nothing too major but enough to warrent a quick upload fix.

My current version of daz studio apparently had a bug that didn’t save the genital animations I made for some files. So reopening them caused them to be become static (REALLY ANNOYING). I’ll need to re-render 1-2 of the new animations sometime.

v0.12.1
— Fixed a bug that didn’t let you progress further than the first ‘HHS’ scene with Courtney.
— Fixed a bug that caused you to do multiple lewd scenes early with Sam by the pool BEFORE getting rid of Keith.
— Fixed a bug that made the screen unclickable when putting up a specific Diane election sign last.
— Fixed a few graphic errors that made certain images not show up correctly.
— Removed a Progress Point on Melissa. I believe I had given her one too many for new saves.

v0.12 beta
– New content for Courtney, Candi, Samantha and Melissa.
– Added a new ‘HHS’ site scene to purchase. Check it out on your computer!
– Changed to Load/Save UI to include more per page.
– Completely redone Candi’s striptease scene to include new content + more options.
– Fixed many graphical mistakes and errors that were left in from the last version.
– Candi’s intro now doesn’t cost the player money.

Notes:
– The shower scene between the MC/Sam/Courtney was planned for V0.12. I was not able to finish it and will add it in sometime this month before I start work on V0.13 (The Melissa focused update)!
– I am also putting together an official walkthrough for the game. It should be ready in a day or two.
– Two new animations have obvious graphical errors. I will be rendering them

F.I.L.F v0.11b:
Fixed a bug that caused the screen to be unclickable when finishing certain Diane repeatable jobs.
Fixed an error that was caused when hitting “back” on a specific new Aubrey idle.
Some aubrey images now display correctly.
Fixed an error that would occur when asking for Aubrey to give you a recipe for Melissa.
Spelling/Grammar fixes

F.I.L.F v0.11a
Update Notes:
– Aubrey/Diane’s questline has been updated. Continue it by revisiting Diane at City Hall.
– Expanded on Sam’s sunbathing options. Check out the new additions (Hint: Do the “Adult Chicken Fight” twice!).
– ~ 200 New/Unique images featuring Aubrey/Samantha/Diane/Delia.
– ~ 13 New animations with many having different variants.
– Revamp of Aubrey’s idles. She now resides in the backyard/kitchen on certain times of the afternoons.
– Diane/Bill now answer the door when they are home. Though that is currently not important to the story.
– Aubrey now visits ALL evenings when she’s NOT at the strip club.
– Diane’s campaign jobs can now be repeatable if you are in need of money (Once you’ve done all three).
——————————————————–
“Altered Destiny” will begin development! What comes with it is improved patron rewards, 1920×1080 resolution images/animations and work streaming!
More details to come VERY VERY soon! Thank you!

F.I.L.F v0.10a
– Samantha’s quest has be updated! Melissa also gets one new smaller scene.
– One new Harpy Website scene to purchase for in game money.
– 250+ new unique scene images.
– 22+ New unique animations. Some come with different variations of speed
– 2 New secret photos
– Sam’s idle times now include some chatty conversation that you can have with her.
– Sam now sunbathes by the pool when she doesn’t have volleyball practice.
– New map location – Motel. Will be associated with a new side character in the future.
– Completely removed the Journal. It didn’t quite live up to being a hinting walkthrough, and was just a bit too much of a hassle to keep updating.
– Secret photos now have an ‘inactive/active’ tag. Inactive tag means that you CAN NOT unlock the image yet. Active means that you can now find the image somewhere out in the world.
– Once you’ve met the Harpies, they may text you an opportunity to make some quick cash.
– Fixed a bug that sometimes made Candi’s buzz bar not display on the 75% quest.

F.I.L.F. v0.9b:
F.I.L.F Update Notes:
– Story continuation for Melissa and Candi that include a multitude of new scenes
– 17 New and Unique Animations
– The inventory screen now has key item sections. Permanent items are now displayed there to help reduce clutter within the disposable item backpack.
– The harpies now have 3 new videos (scenes) that you can purchase with in-game money to watch at your leisure. New videos will be added in each update and the characters involved will be decided through patron voting.
– 2 new secret photos to be found in the world. Cherry and Candi theme. You can find them in locations that are associated with their characters.

Patch Instructions
Unpack and simply add the file to the /game folder.