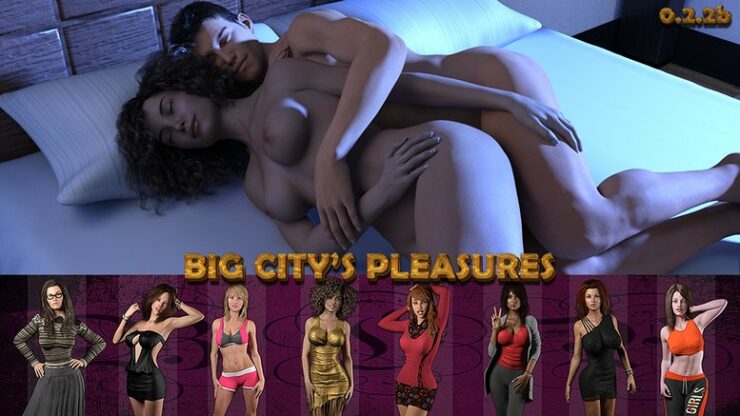 About game:
The game is about Tony, a boy who lives in a village far from the big city and has to move to live in it to study.
Luckily his childhood friend Gina allows he to live in a room at her apartment.
And with this he begins his adventures, meeting again with his friend and other girls from the city.
Soon he will find himself in unusual situations for him that will make discover his sexuality in many ways… but not everything is what it seems in the city, and Tony will be involved in more than a mystery…

+ Features:
At this moment it contains:
More than 2145 high quality FullHD images
51 Hot animations
About 12 places to move
About 13 characters to interact
Music, sound effects and some moan voices for main characters

Programming improvements (among many others)

v0.4.1 and v0.4.2 fix some small bugs, but in any case they don’t prevent you from playing all the scenes and reaching the end of this version; if you have already completed the game in v0.4, you don’t need to update and play again.

v0.4
New programming:
New dreams menu
Phone contacts now unlock when the become available
Reintroduced built-in cheats (click on MC in the stats screen)
New wallpaper picker for the phone (with a lot more options)
Improved aesthetics
Improvements in exists quests
Very detailed quests
Added a player renaming option
New colorpicker for dialogues background (also an option to disabled the picker)
Added names to shop and inventory items
Mainmenu redesign
New notifications system (notifies about unlocked quests and received messages)
You can now see your overall progress and your progress per character
Added the Pleasure Meter
Added a side menu, which gives you access to your stats, quests and phone
Redesigned top bar (information bar)
Option to give a name to saves or delete them

More content in Big City’s Pleasures:
165 New animations !!!
917 New images !
23 New songs
Gina: Continuation of the final scene in version 0.3.1 with Gina
Gina: The best scene I’ve created so far! (Have your scarves ready)
Cassie: Not everything happens in the photo studio 😉
Charlene: She’s about to tell you something shocking!
Jessy & Gina: Time to have some fun with Gina
Alexia & Sabrina: Scene with 3 possible endings, choose to your liking!
Ms Cooper & Jennifer: 2 scenes… The really interesting lessons begin!

Big City’s Pleasures 0.3
New programming: Many changes and improvements have been made to almost the entire game!

New quests system: Much better than the previous one. We hope this helps you to know what to do at all the time. Maybe we have to adjust something, but the way it’s programmed allows to do it without causing any problem with your save files 😀
New interface for the smartphone: A nice interface with many features… view contacts with their statistics, receive and send messages, image gallery, replay gallery, customize the wallpaper, …
New dialog box: Do you want to see the text as you like it? Just place the cursor over the text box and use the “Color Picker” to make it look as you like, cool right?
The game stores have been reprogrammed, with a new design and better functionality
New Main Menu: New more minimalist aesthetic, we hope you like it!
New replay screen for scenes (in Extras)
New screen to see the previous months 4K Specials as they are available (in Extras)… Oh, and you can see them in their original resolution, 4K, and zoom and navigate through the image, isn’t that cool? 😮
New progress notification system (when you do yoga or when you read the comics)
New aiming system (Poor Olivia, lol)
And many other internal changes that you will not see but that improve many functionalities

I want to take advantage that I’ve commented all these changes to thank the one who has made it possible, 0x52, he is the new programmer who has collaborated a lot in this new version, a real professional who has taken this game to a new level (IMHO),

I’ve tried to eliminate some unnecessary repetitions, or that as some scenes are repeated there are small variations; we can still reduce some scenes, but I hope that the work done will make it more fun to play.

More content: Many new images and animations… but mainly animations, this is the version in which more animations have been generated by far! But it’s not only the quantity, but also the quality of them; they have been created with much love taking into account every small detail and using the latest technologies, I hope you enjoy them!

Big City’s Pleasures 0.2.4
579 high-quality images carefully created with attention to every detail!
32 new animations, some of them with realistic physics simulation technology!
New music and sound effects
Great stories, feelings, and good times for you to have fun
Initial notes:
This version is especially dedicated to the «continuation of the story with Gina» that was left pending in the previous version; she is the real protagonist and I’ve tried to create a realistic and beautiful story with her and the protagonist (you); I hope you like it and that it evokes in you the same feelings that I had in its creation.

But there is much more than Gina in this version
New Scenes:
Continuation of the story with Gina (Queen of the game!):
Continuation of the «Great scene» of v0.2.2 («The day after»)
Spy her in the bathroom, in her privacy she will do things, good things
Great final story !

Introducing Cassandra Vamp (Sandra):
Jessy will introduce you to her great friend Sandra… I’m sure you’ll love her!
Interactivity in «action» scenes

Interaction with Jessy:
Enjoy the first session in front of the webcam with our naughty girl, Jessy!
Interactivity in «action» scenes

Interaction with Ms Cooper:
Several small scenes where certain things will be revealed, and there will be some changes in «who’s in charge», lol
There will be a special guest in the final scene

Interaction with the shop assistant:
Spend a few bucks at the store on something expensive and she’ll make you a special offer you shouldn’t refuse
Interactivity in «action» scenes

Special Ending:
I prepared something special for the end of this version, I hope you like it
*Note 1: The Android version, because it requires more compression of images and videos, I will prepare it tonight.
*Note 2: I didn’t have time to add some of the new scenes to the «replay system», sorry, as soon as I can I’ll add it and make a new compilation.
Note 3: Although I tried to check that everything works fine, it’s likely that you, who will squeeze the most out of it, will find small details to improve/correct; please, don’t hesitate to contact me (preferably via email) to comment them and I will check it out right away

Big City’s Pleasures 0.2.3b
– Fixed a possible bug in Katia’s route
– Fixed bug in “Replays” that made some of them not show up even if they had seen in the game (specifically, the scene with Jessy in her room and the last scene with Megan).
– Improved English translation (on Katia’s route)
– Inclusion in credits of a new “Pervert”; I forgot him, sorry :p

Initial notes:
Due to a poll in our patreon, this update has been specially dedicated to Katia. The scenes with her have given us a lot of work because we wanted to build a good story without precipitating events; this has caused a great delay in the publication of this version and, not to delay it any longer, we have been forced to skip the continuation of the scene with Gina, which we regret.That’s something that may surprise you if you start playing from a save file in that scene… it’s a bit abrupt since there’s no continuation. Please keep that save file so you can continue from there as soon as we publish the next version; that version (v0.2.4) will be only and exclusively dedicated to the continuation of the scene with Gina, so it won’t take as long to publish it as this last one.Having said that, we hope that the work done with Katia has been worth the effort and that you enjoy it!

New Scenes:
Interaction of Katia (Queen of this version):
You will be able to make multitude of visits with diverse variations and to evolve a lot in the relation
Interactivity in “action” scenes
Katia will tell you her big secret ?

Introducing Megan:
You’ll finally meet Megan.
Several scenes with her and an interesting story with a… foreseeable ending ?

Interaction with Cassie:
Cassie has a surprise for the “town boy”, don’t miss it!

New Scenario:
The Fashion Shop
New Character (a hot one, hehe)
Use it to buy the clothes you need ?
*Note: At the moment it has adapted to Katia’s missions, but in the future there will be much more variety of clothes to choose from ?

New replay system:
In the main menu, if you click on “EXTRAS”, you’ll have the possibility of repeating scenes of the game once you have unlocked them (they unlock automatically when you see them).

Known Issues:
One animation with Megan has a different lighting and you can see the change; we will correct it in the next version (minor problem).

Recommendations
– Activate the audio, the experience will be much better!
– Enjoy each scene slowly and with love 😉

Interaction with Jessy:
Interesting things will be revealed

Interaction with Cassie:
Tony will be able to buy the camera
You can visit Cassie that explain how it works
New photo shoot with several variations and very, very hot!

Interaction in the apartment:
You can spy on Gina and Scott when they’re in the room (if you want and can resist it)

Interaction with Gina:
Great scene with Gina, don’t miss it!!!

Other gameplay changes:
Now you can visit Katia in the park also on Sundays (Speeds up Katia’s path)
Waitress icon added to the map when you can earn money in the coffeeshop
Some repetitive scenes incorporate a fast forward button

Others:
Minor bug fixes
Correction of some spelling mistakes

Interaction with Charlene:
New scenes with her with a lot of dialogue so that you can get to know her well
New scenario (Charlene and Olivia’s room)

Interaction with Olivia:
Small variation when you visit her in the pool (2 animations)

Interaction with Jessy:
New little scene where she sunbathe on the balcony (selfie)
4 new random images of her and Dickuo in Big City’s Pleasures

Interaction in the store:
You can buy the smartphone

Now you can change the name of the protagonist (Tony)
New notifications when receiving messages on your smartphone or when unlocking objects
Added two buttons for fast time advance
A small image of the speaking character has been added to the text interface
In the shop, items that cannot be bought at the moment will be grayed out and disabled
Added object icons to know when and where to use them
Inventory now opens and closes with the same button

Others in Big City’s Pleasures:
Minor bug fixes
Added option to choose whether or not you want to see Gina and Scott fucking at the beginning of the game
Revised and improved English translation