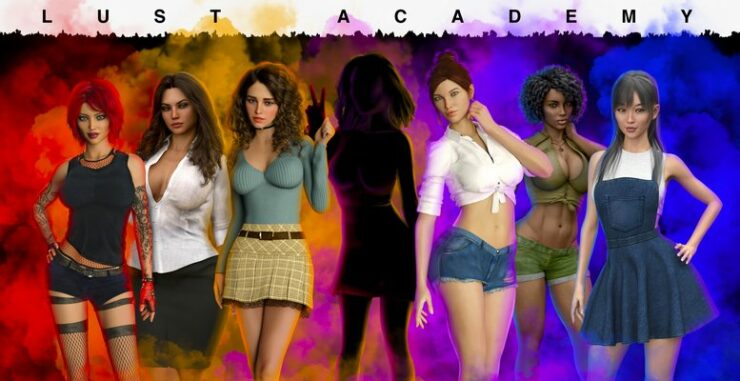 About game:
You play as a normal 18 y.o. guy who’s life is about to change forever! You’ll find out about the whole world full of magic and sexy adventure that awaits you at Cordale – the oldest academy of magic and wizardry in the New World. The most important thing: don’t forget to get to know other students and teachers! We’re sure you’ll find most of them… charming!​

+ Changelog
Season 2 – v1.6.1d
For the delta version, we’ve worked hard on polishing and perfecting the content, so here’s what you’ll get:

With that update, we can proudly present you with the final version of Lust Academy 1.6.1. And here what it contains:

Season 2 v1.5.1 beta:
First of all: Visual Novel mode for 1.5.1 scenes has arrived!
And it comes with 3 new scenes and 27 new beautiful renders!
We’ve also added a new scorching hot scene with Adele.
With more than 70 new beautiful renders.
And 18 Full HD 60fps animations!
On top of that, we’ve added 24 more new beautiful animations for old scenes across Season 2.
And the cherry on the top: we’ve found & exterminated a bunch of nasty bugs!

v1.4.1 delta:
Added VIP lounge in the Club from the first season.
Added 4 scenes with Lucy and Sadira to the Gallery.
Fixed a bug with Amelie’s root in the Character info.
Fixed dialogues in old scenes.
And a few other minor bugfixes.

So now, the complete list of content for Lust Academy Season 2 v1.4.1 looks like this:
An enticing story told through 38 new thrilling scenes.
Supported by 710 new beautiful renders!
Two playable modes: Sandbox and Visual Novel.
Additional 25 new top-notch renders for Instagram.
The town of Dale returns with new content!
4 scenes in the VIP lounge in Dale.
Returning character from season 1!
Activities like: Massage & Chit-chat in the cafe.
Added 4 scenes with Lucy and Sadira to the Gallery.
Fixed a bug with Amelie’s root in the Character info.
Proofread and rewritten dialogues!
Fixed bugs!

Season 2 v1.2.1d
Here’s what you’ll find inside:
Over 535 new beautiful renders.
A thrilling story told through 13 different scenes.
An introduction to the new essential characters in the game.
20 hot and juicy 60fps HD animations for your gallery.
Several grammatical errors and bugs fixed in 1.1.1 scenes.
And if you’ve already played the alpha version, here’s the short list of changes made especially for beta:
Extended the scene where Ashley and MC travel to the Academy with new juicy renders.
Improved dialogues & fixed some typos.
Fixed minor bugs all across the game.
And for those who played the beta version, we have the shortest list of changes in the history of Lust Academy patches…
Fixed a lot of bugs and typos across the game.

Season 2 v1.1.1d
Access to the first part of the Season two prologue. Travel with MC to Samantha’s parent’s house and spend some quality time with Samantha, Ashley, Olivia, and Don. Solve the mystery of Mister X and get ready to travel back to Cordale academy of witchcraft and wizardry!
We know you’re interested in details, so here’s what you get playing Lust Academy Season 2 v1.1.1:

If you’ve already tried version 1.1.1. you’re probably interested to know what’s new in v.1.1.1d.
And to be honest – not much. This patch is about polishing scenes, fixing some typos, improving dialogues, etc. So the list looks like this:

Fixed a few bugs and typos.
Improved some dialogues in Lust Academy.
Fixed some graphical glitches on renders.

v0.7.1
625 new top-notch renders split among those 15 scenes
105 new beautiful renders for Visual Novel and active objects
Added Visual Novel version for 0.7.1
35 new scorching hot 60fps HD animations for romantic scenes
20 new charming Lustagram photos
New lesson in Victoria’s class is available in Sandbox only
Eastern eggs in Sandbox only, including a scene with a new girl
Added several decorative & active objects across the Cordale
Updated BIO in Character Info
3 new episodes were added to the Gallery
Don’t forget about the season 1 Outro scene
Added sound design for X-scenes, including female moans
Added final infographics with the progress of the main characters to the endgame screen
Now you can re-watch all animations at the end of the scene
Improved some old dialogues
Fixed several bugs

v0.6.1d
12 new massive scenes with everything! From epic magical encounters to love stories and nightmares!
Visual Novel version for 0.6.1 scenes!
480 new beautiful renders with Haley, Leona, Samantha, Audrey, Victoria, Adele, and Mina.
20 new interesting renders only for VN version.
30 new mind-blowing 60fps animations to ensure you get the best user experience from new scenes.
New girl – meet Dakota, Samantha’s old rival that’s here to crash the party once again.
Added the possibility of going to the bathroom to shower and jerk-off to previous sex scenes.
Added an option to change camera angles in sex animations!
Added useful tips for the new day preloaders.
Added an active object: cauldron in potion’s class which you can activate anytime to brew potions.
Added a new recipe to Potions.
Added animated objects on the map.
Added new animated objects scattered across game locations.
Improved hints on some routes in Character Info.
Fixed bugs in Audrey’s route logic.
Fixed some character sprites in the Living Room.
Fixed a problem when you couldn’t refuse sex in Naomi’s route.
Xmas Special small update – we’ve removed Xmas Special from the main menu. Now you can access it through an easter egg in MC’s room in the dorm.
Increased the number of house points you get passively.
Returning books is now rewarded with 2 house points.
Minor interface improvements.
Fixed several bugs.

v0.5.1f
Added notifications at the beginning of a new game day.
Added camera angle change (only in one scene with Naomi so far).
Adapted code to allow translations into other languages
Fixed several structural errors.

v0.3.1с
– More than 550 new top-quality renders with your favorite characters!
– Over 27 new 60-fps animations! Careful not to get burned, ’cause some of them are scorching hot!
– Reworked avatars for Character Info and Calendar.
– Reworked Character Info sorting system.
– New potion lessons and new recipes to learn.
– New potion crafting system.
– House points distribution system reworked.
– Inventory and profile combined.
– Notifications reworked.
– Tutorial improved.
– Reworked and improved Lustagram mechanics.
– Added new content to Lustagram.
– Added LGBTQ+ switch to Settings (can be enabled/disabled) at any point.
– Added personal LGBTQ+ switch for characters that have those in Charinfo.
– Added $50 allowance bonus for the house that wins the weekly competition.
– Improved some old dialogues.
– Repaired menu and interface bugs
– Fixed bugs in the calendar
– Fixed minor bugs all across the game