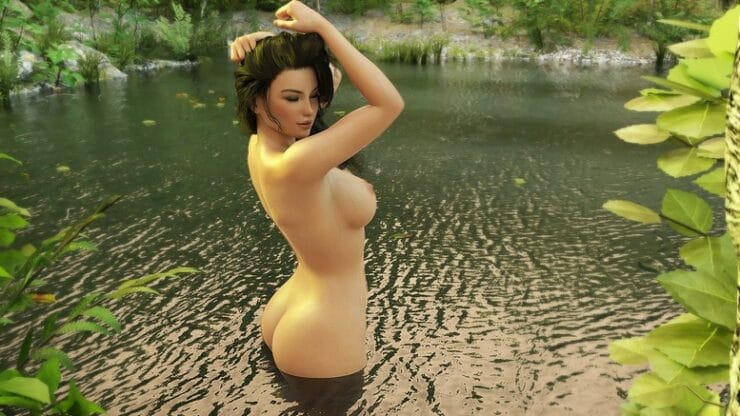 About game:
Farmer’s Dreams sends player to the medieval fantasy world! The main character is a simple, not very successful farmer. A big storm destroyed your village, which will need to be restored, in this you are hampered by monsters and thieves. The female half of the population needs help. Build relationships, seduce and have wild, medieval sex! You are offered many options for development that will change the main story…

+ Changelog
R22 Gold
Brooke + Kaya New Scene (103 CGs)
Heather New Scene (41 CGs)
[New] Peeping on girls bathing at the lake will now give you Corruption Points
[New] Derek will teach you the Bomb Recipe if he’s your Master for at least 2 days and you reach Explorer 5 (only if you decided to be just friends with Nina)
[Update] Black Berry Pie quest changed from requesting 100 Blackberries to 25.
[Update/Fix] Scenes with Nina just before and during the storm updated to avoid frozen picture bug.
[Fix] Working at Laura’s store after the village is fixed transporting you back to the old, destroyed village.
[Fix] Impossible to enter the Crystal Cave.
[Fix] Blowing the rock at the crystal’s cave entrance would make Nina’s scenes available anyway, messing up some events.
[Fix] Changing the key to use items not working for planting seeds.
[Fix] Sophie and Brooke giving you gifts outside the Gift Day.

R21.1
[Fix] Recipe: Bomb using Rocks instead of Black Powder
[Fix] Existing Chests, Standing Torches and Furnaces getting messed up when loading R21. If you placed any of those during your R21 gameplay they’ll probably get messed up with this fix (and future version) as well.
[Fix] Impossible to deliver ores to Derek to complete his quest
[Fix] Rain stopping when you regain control of your character during the storm
[Fix] Autosave locking pictures (I can’t reproduce this bug here, so let me know if this fix actually works. This won’t unfreeze a picture if you already got the bug in your current save — but you can try enabling autosave and moving to a different map if you can find your way)
[Update] Autosave message. Let me know if the sound is too annoying to play every time you change maps!
[Update] Requirement to get Alma’s panties during the Gift Day changed from 30 FP to 10 FP (talk to her on 10 different days before the Gift Day event to get all the points you need)
[Aware] Opening menu will erase the current weather effect (snow or evented rain only, not real weather) (visual only)
[Aware] It’s possible to bug the fishing somehow so you won’t be able to open your menu after, but I can’t consistently do it to find what the problem is. If you can replicate this bug please let me know how. It’s probably related to being able to use the rotate tool during fishing.

R21
Mia New Scene (42 CGs)
Sophie New Scene (3 CGs)
Alma New Scene (3 CGs)
[New] Gift Day is a special event that will allow you to give unlimited gifts during that day. It will also enable all the new scenes in this version. There is a small chance of getting it every day after you unblock it by talking to the man with a red hat in the new village map (and doing that will guarantee a Gift Day in the next day).
[New] Winter theme/graphics in the village and farm during the Gift Day.
[New] New Items: Sunflower, Festive Gift, Fancy Purse, Coin Piggy, Alma’s Panties, Mia’s Festival Panties, Sophie’s Panties, Ice Cream, Recipe: Bomb and Help Cornett.
[New] The gold pickaxe quest was renamed to “Bomber”. This quest is now completable.
[New] Derek will sell black powder after finishing the Bomber quest .
[New] Added chests with Black Powder inside goblins’ caves that can reappear every day.
[New] Help Cornett is a new item that can be used inside the mine. It allows you to go back to the entrance even if you have no energy left. Derek will give you one after you open the mine. If you’re already past that in your current save, you’ll find a red chest near the mine entrance with the Help Cornett inside it.
[New] Added the new Marcus’ Gift Shop in Farmer’s Dreams
[Fix] Receiving Grass after using the Scythe on a Healing Herb.
[Fix] Amanda gift not resetting after giving expensive gift for the second time.
[Fix] Impossible to use Water Fruit and Mermaid Potion
[Fix] Goblin inside small cave staying there for multiple days instead of resetting chance of finding it every day.

R20
Selena New Scene (53 CGs)
5 Loop Animations (Selena) [30 seconds ,777 unique frames] Mia New Scene (37 CGs)
Scene Remake (Amanda+Sophie Kissing) (8 CGs)
Scene Remake (Amanda Changing) (3 CGs)
Scene Remake (Mia gathering berries) (4 CGs)
[New] Fisherman will sell you fish now, including before the big waryfish quest if you want to “cheat” (and never play the fishing minigame again =P)
[New] Daily Quests (featuring 6 characters so far, more to come)
[New] New visual for shops in Farmer’s Dreams.
[New] Derek’s new shop.
[New] Added a chest near Derek to sell your ores and ingots.
[New] Donation Chest (Elder) now gives you +1 Honor for every 1000G you make from it (max +1 each time. So if you make, for example, 5000G from one sell you will only get +1 Honor instead of +5).
[New] Item prices can randomly become more expensive or cheaper every day – prices variate from high( x1.5), normal(x1) and low (x0.5). The current price also applies when selling items but there is no visual indicator for prices right now (only when buying), so be careful!
[Fix] Autosave freezing pictures on screen
[Fix] File missing bug inside the underwater cave
[Fix] Cheat Crystal failing to access some scenes
[Fix] Working at the PUB being available after the bandits scene.
[Fix] Blonde NPC at the PUB starting a scene with Evelyn
[Fix] Time passage bugs
[Fix] Daily quest disappearing
[Fix] Added back Cloth to Laura’s shop.
[Fix/Update] Donation Chest at Elder’s house is now fixed and improved. It also stays available forever now – use it to sell crops (at a lower price) from the beginning!
[Update] Complete in-game Scenes List with information on how to get them!
[Update] Evelyn’s cat can now be found after the Blue Flower quest
[Update] Make fishing a bit easier. It’s also easier to find a Waryfish now.
[Update] Relationship menu pictures updated.
[Update] Food Donation quest objective updated from 100 items donated to donating 1000G in food (from the real selling price, not your actual profit.
[Update] Redd first item as a master is the chest recipe. You can now craft and place new chests in your farm.

Fast Travel is currently broken.
If you take a quest from the Bulletin Board and close the game it’ll disappear (but they renew every day)

Farmer’s Dreams R17
[New] Hold to expand the tool’s area of effect (Watering Can and Hoe. Copper tool gives a 3×1 range and Iron a 3×3 range )
[New] Possible to cut the previously irremovable plants in your farm (Copper+ Scythe)
[New] New items: Healing Herb, Healing Potion, Fire Stone, Standing Torch, Grass Path, Stepping Stone Path
[New] 2 new Mine levels
[New] New option available – ask Darius to build the tent for Alma
[New] Delivering ores to Derek will give you recipes to all tool’s upgrades for that level (if you already delivered the copper ores, buy all recipes from his store before updating your game or you won’t be able to get them anymore, the shop option was removed)
[New] New Masters – Derek and Redd
[Update] Tool’s graphics updated
[Update] Not possible to walk using the mouse anymore (due to lag issues)
[Update] Implemented all upgraded tools (except for rods and hammer iron+)
[Update] Truth Ore Dare! quest changed from 20 to 10 of each ore.
[Update] Mine now resets every time you enter a floor/room, giving you unlimited loot.
[Fix] Weather showing inside Trevor’s house and Elise’s house
[Fix] Impossible to place Furnace
[Fix] Alma sprite changing color
[Fix] Fixed some bugs with Hoe tool
[Fix] Forest slime locking player in a loop. It now disappears after the blue flower quest
[Fix] First Laura scene replay not working (Exclusive Version)
[Fix] Harvesting crops behind trees bug
[Fix] Possible to donate food before the quest starts
[Fix] Issue with heather’s donation quest order
[Fix] New Laura’s scene repeating every time. Fixed conditions to start the ‘girlfriend’ scene again.
Sleep with your copper tools in your inventory in case you have made them before R17 to fix them!