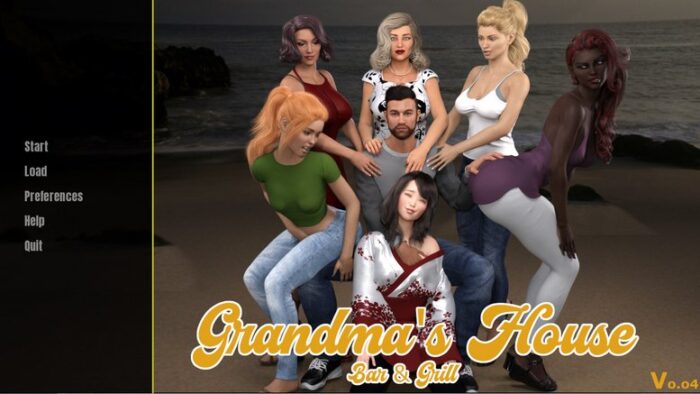 About game:
MC comes home from college and has lots of sex. Your standard cookie-cutter incest game with all the staples you’ve come to expect like shower peeping, sleep groping and the classic “walking in on MC’s morning wood” scene. Except this time there’s a twist, you’ll be seducing your Grandmother’s Friend instead of your Landlady…

-Named saves (Courtesy of Wolf™ )
There no pop-up, just write the name in the top left corner then save.

-Typos
Fixed a bunch of typos from older versions.

-Fixes
Fixed some typos and renders from older versions

-Days 2 to 5
New content is about 3x longer than the demo, not as long as I would have like but considering the demo took me longer to make, I’d say I’m making decent progress in Grandma’s House

-Added quick menu to PC/Mac versions
It was actually always there but the custom font made it appear off-screen.

-Switched images from PNG to WEBP
Not much of a choice, update would have been over 3GB which is just false advertisement because it’s really not that long.

-Denoised all renders
They should look less grainy now.

-Fixed some demo renders and typos
Just the really bad ones. I’ll be re-rendering the demo and likely the first few updates eventually so I don’t want to waste time redoing them now.

+ Developer Notes
About the game:
There’s going to be quite a bit of kinks in this game, I realize not everything is for everyone so pretty much all scenes will be avoidable except for vanilla scenes with the main family. The family relationship is not optional because it would create a ridiculous amount of alternate scenes to make but each scene will mostly be optional.