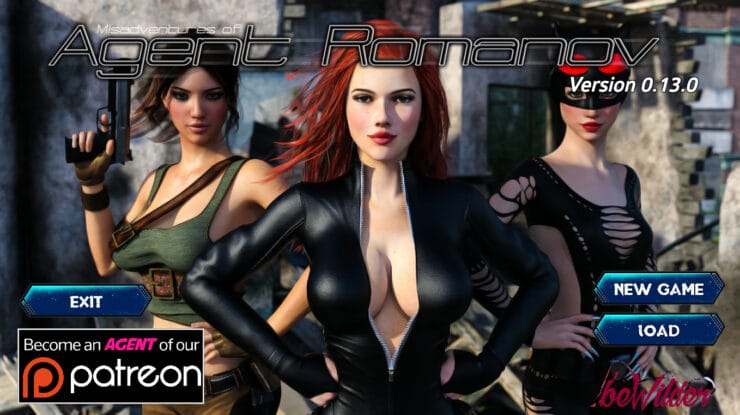 The main character for this volume is Agent Romanov, a lovely red-headed spy that takes part in risky missions with lots of action. You will have to struggle against a menacing alien force, an army from an evil corporation, inside conspiracies, and villains that won’t make your life easy.
In all those situations, you will have to decide which path you want to follow: Do you want to be the Hero that saves the day, or the Villain with unorthodox methods. that still saves the day?

+ Changelog
v0.21
Bold Release: Agents of Heels v0.21 (Kate’s Party Pt.3 Release)
Hoorah! Here we are again, and wild times come visit once more! We’ve got one more shot to down while we’re in the party mood, as we spend our time with Kate, Malik, Sam and Tim, plus special guest Kelsey’s one last wiggle too. It’s our last hurray in the side content sphere too, so let’s make it wild! While enough that we make Bat Nat happy, but maybe not so hurty, huh? Find the game ready to rock, because it’s drink, sex and action from here on out!
0.21.0 Patch Notes
– Technical information
⦁ Version: 0.21.0
⦁ Weight: 4.08 GB
⦁ Weight Packed: 3.09 GB
– Content in Misadventures of Agent Romanov
This version is the third and final instalment of Kate’s special neighbourhood party, primarily focused on Bad Nat, the sadistic, wild, horny, and happily Ivyspawned heroine of ours. Things get competitive, but even more so they are fierce and cruel, so buckle up for some female domination and kinky sex worthy of a day off from saving (or stealing) the world!
1 new scene extension, the Bad Nat path to the main party scene. Kate’s party kicks off just like before, only the beer pong bet goes a sideways, leading to the girls taking the party out onto the town! The first half of the scene has also been altered with a Bad Nat Variant on this path as well.
Similar to the previous version, the 4 party scenes will autoplay as one long back-to-back like a mission scene. This version’s content is exclusive to Bad Nat, and hence no new content is supplied for Good/Corrupt Nat playthroughs.
⦁ 1 added in-game day in the life of our Nat, for added breathing space when playing the new Bad Nat content as some players may have spent their remaining days in the previous Good/Corrupt update releases looking for new Bad Nat content.
⦁ 82 new CGs, ~29,000 words of new text.
– Features
⦁ Part 3 of Kate’s Party, focused on the Bad Nat variant to the common scene section of the main party scene, as well as the exclusive Bad Nat party ending path, out on the town, lasting a full 82 CGs.
⦁ Continuation and completion of our first big crossover between our shared world’s main games, as Kelsey remains a guest for one last time during the Bad Nat ends of the party. Once again, we further the Kelsey-Kate friendships and shine a light on some of their older times and party habits together. While Bad Nat has the balls to give them both a push for their money when it comes to their feelings.
– Community Feedback
For the third time now, we have no Community Feedback to include in our version’s update this time, as the likely remainder of improvements and clean up are fit to be held for the post contented updates to v1.0. We of course are up for and open to constructive feedback on all things regardless of that, but we’re happy to say that for this version we had no needed and notable improvements as suggested by the fans. That’s a good thing indeed.
Reminder: As of the previous version’s Community Feedback, Save Files can now be found in the Users section of your hard drive, under AppData\Local\BeWilder\Agents of Heels (Windows version). Mac can be found under ~/Library/Application Support/BeWilder/Agents of Heels (Our best estimate, yours may vary). This was to allow persistent and better easy of use between versions without the need for manual save coordination.
– Known Issues
⦁ There is an issue with Mac OS’s Catalina which is not addressable by us on the developer side, but can be worked around on the user’s end. “Problem is specifically with the guardian system that won’t let un-noterized applications run on Catalina. The solution is to chmod -R 777 “/appdirectory/” from the terminal as the application did not have the executable flag set. (Example: chmod -R 777 ~/Desktop/AoH_021_Mac). After this guardian catches it and control clicking on the app lets it be opened.” Repeat: Then you’ve got to CONTROL+Click (not double click like normal). That should allow the app package to run, if not, please tell us!
⦁ We have one Known Issue with the Gallery UI which will be taken care of in future versions, when time permits. The scenes listed in the UI all come with a colour coded icon in the top left which denotes which version of Nat it corresponds too (Standard/Common path, Good, Corrupt and Bad). However, for now this icon is only denoting Standard/Common for all scenes, which will need to be manually fixed for each scene in future. For now, the scene name text label denotes which path the scene should correspond to.
⦁ There is a known issue involving the main story and conditions on the Nat character paths. If the player ignores the main story to the point they miss completing Mission #1 (Day 5ish start) by the time Mission #2 kicks off (Day 12), they will be stuck in a limbo state of having missed the main plot of the game. We will be resolving this minuscule player experience in future versions, possibly with a Bad End since Nat has purposely ignored all story actions for weeks, until after it’s too late to resolve the story. Anyway, a heads up on it, try not to do that alright?
Be Bold and beWilder!

These scene rewrites include Spook’s versions of texts and wording, for a more consistent tone and writing style throughout the game, as well as a native English speaker’s version on the texts.

~9,650 or so new words of revamped Text and Dialogue from Act 1 scenes in Agents of Heels: Misadventures of Agent Romanov.

⦁ Version: 0.16.0 Misadventures of Agent Romanov
⦁ Weight: 3.37 GB
⦁ Weight Packed: 2.46 GB
– Misadventures of Agent Romanov Content
⦁ Added a yet another whole new day to the gameplay and with it another night to make Nat the life of the party! That makes the time frame reach up until the end of Day 17 After Infection.
⦁ Added 2 new full scenes, each with a small Pre-Scene which auto-plays on start. Technically it is 4 scenes, but you as the player will play them as 2.
1 Side Event Scene (and pre-scene) focused on Maeda and his Cartel, as well as his plans for the future. He has off the books work for Natasha if she is interested in some team bonding, now that fortunes and shifting alliances have made them bedfellows. This scene is exclusively for Corrupt Nat, those that have chosen to give herself over to Ivy’s side, taking place at night.
1 Side Content scene (and pre-scene) for both Good and Corrupt Nat, continuing and at last concluding the Catwoman side-line of events. Picking up after Cat won their last game of pool, Nat has to fulfil her end of the bargain as the eye candy in Cat’s heist plans, giving her the perfect opportunity to really test Cat’s skills a real mission of their own. This is by far our longest scene to date with 80 CGs total (that’s a whole version’s worth) and new fetish added to our repertoire going forward. As the scene is so long, there is no text variants between Good and Corrupt Nat, they both get the exact same scene. This scene will autoplay on the next free night Nat has after the previous Cat pool playing scene.
(Note: Cat will be in other end game content, this is the last of her scenes, but not the last of her).
⦁ 115 new CGs, ~30,400 or so new words of Text and Dialogue.
– Features Agents of Heels: Misadventures of Agent Romanov
⦁ The furtherance of two side event lines, opening the alliance content with Maeda while also concluding the teaming up of Natasha and Catwoman. As said above, while this is the end the Catwoman focused events in MoAR, it is not the end of Catwoman’s part in the game.
⦁ Added new fetish content to the beWilderverse for the first time. We will not spoil the surprise here.
⦁ In attempts to make up for the lower new content count added in the last version, due to technical feature additions, we’ve included nearly an extra 50% content to the CG count this time out. Our main scene for this version is 80 CGs in total, a full version’s worth, with a single path with 65+ CG as well.
– Community Feedback
⦁ The results of our AoH v0.16 Content poll were very interesting, and basing our plans for this version and the next few on much of the results, we think it’s fair to say that community feedback helped in shaping the scenes for this version and our take on them. Thanks to all the beWildernauts who took part and cast votes when we asked!
⦁ We’ve fixed up some small typos and grammar mistakes in the middle game scenes, where appropriate. Earlier scenes in Act 1 are still on our complete update / text rewrites and so will be handled then. Thanks to a few people for spotting these!
– Known Issues
⦁ There is one small Known Issue with the UI for the Fast Forward skip. When clicking on a comic panel to review its contents, first you have to click on it to turn off Skip if it’s active. In that case, the icon denoting Fast Forward stays active rather than toggling off, even though the feature is off. We’ll fix this small visual bug in a future build.
⦁ There is a known issue involving the main story and conditions on the Nat character paths. If the player ignores the main story to the point they miss completing Mission #1 (Day 5ish start) by the time Mission #2 kicks off (Day 12), they will be stuck in a limbo state of having missed the main plot of the game. We will be resolving this minuscule player experience in future versions, possibly with a Bad End since Nat has purposely ignored all story actions for weeks, until after it’s too late to resolve the story. Anyway, a heads up on it, try not to do that alright?