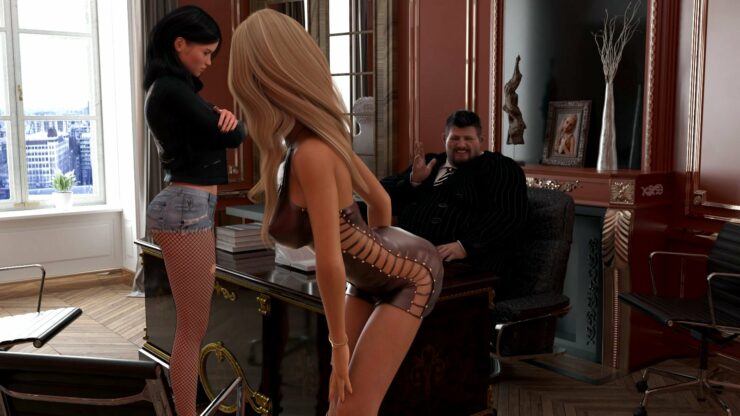 About game:
This Game is about Monica. Monica is a “Rich Bitch”. Monica is the Boss. Most of all Monica adores authority and to control people and she manages with everything not in a sensitive or delicate way. If Monica was your Boss, you would be likely fired. For certain, everybody has ever met their own Monica! Take part in her luxurious life. Monica is sure that her existence is going to be always the same! What do you think? If suddenly you appear as witness of her falling down lower and lower in the social standing?

I’m happy to present you with the newest regular update for the game!
I did my best to make it as polished and as interesting as possible by putting in tons of hours, and love for the project!
This update ended up including 2500 new images, a record number in “Fashion Business” history!
The update also features a huge number of hot animations and 3600 lines of dialogue!
I hope you’ll be able to enjoy this new update a lot. That would make me very happy 🙂

Improvements
Gallery was updated. You can now stop replaying the scene in the gallery by pressing the “Stop” button.
Bug fixes.

Episode 3 v12
This update includes 1774 cool images, many hot animations, and 20223 words worth of dialogue!

During this update, I had to reorganize my working pipeline a little. But despite all the challenges, I always try to get the work done as quickly as possible.

Improvements:
Fixed bug with the starting of quest “Love Triangle”
Other bugfixes.

Announcement:
Due to techincal problems, my website can be not accessible for some days. I’m working on it and the problem will be fixed soon.

Once again, massive thanks to everyone for your support!
Monica’s adventures will continue thanks to all of you!

Ep3 v8:
This update consists of 1137 new pictures and a ton of cool animations!

Ep.3 v7:
What’s new:
– Biff: New auditions. Things are getting more and more fun. (animated scene + extra animated scene)
– Office: Continuation of the department’s story arc. Intrigue and blackmail.
– Victoria: Unexpected details of Victoria’s life, as well as the continuation of her friendship plans. How will those affect Stephanie and Melanie? (animated scenes)
– Shiny Hole: Claire explores the new horizons of her sexuality.
– Falling Path: In order to stay afloat, Monica has to steal clients from prostitutes. What will end up happening with her because of that?

Bug fixes and improvements:
– You can now set a custom name for your saves.
– Implemented scrolling through text by pressing the space bar.
– Bug fixes

Ep3 v6:
This update includes 1772 new images and a lot of animations. I’ve also experimented how animations are presented in this update. I hope to hear your feedback on that!
What’s new:

VIP-Escort: Monica becomes the hotel’s administrator. She can now distribute clients to the girls, fine the girls and hold staff meetings. (An extra scene during the meeting)
Julia: Monica doesn’t help Julia around the house and doesn’t chip in their shared budget. How will Julia react to that? (an extra scene)
Marcus: Monica continues to visit Marcus. To initiate this quest, load the appropriate save game or start a new game and choose the “Marcus’ Training” plot line. (animated scene)
Falling path: Monica meets Misty and gets an interesting offer from her. Will Monica be able to get what she wants? (animated scene)
Falling path: Monica takes a walk around the park and meets the friends of Tim and Tom. What can this lead to? (big animated scene) (one more scene in the extra version)

Improvements:
A number of bugfixes.
Thank you so much for your continuous support! This game could’ve never existed without you all! You guys really help the game grow and improve!

Ep.3 v.4
Fashion Business: EP3 Crossroads (v4) has been released!
I’m excited to present you another regular update for the beloved game, “Fashion Business”!
As always, we did a lot of work so the update could be released on time. Your support is very important for me and our team so I’m doing my best to make you happy.

This update consists of 1130 new pictures and 64 animated clips!

Fixes:
Fixed a bug that caused the game to crash during loading
EP2 part 1 renamed to EP2.1: New Life, Spanish language support added. Bardie’s storyline removed (I had to do it because of the abuse).
Other small fixes

Private presentation for the investors. What else will Monica have to do to convince them to invest in her magazine?
VIP Escort Service: meeting your former fan. Will Monica be able to use him to solve her temporary troubles?
VIP Escort Service: Start of a “friendship” with escort girls.
Philip: Monica receives new experience. (extra scene with extreme content)
Betty: continuing to strengthen the relationship between neighbors. A faithful wife. New experience.
Falling Path: two new big events in Monica’s apartment (an extra version scene).
Shiny Hole: Claire’s problems. Will Monica help her or will she not involve herself? And who will she use to help Claire? New big quest.

Events list: a new system of quest description. Read about it below.
French language support added (98% translated, in progress)

Betty. A faithful wife meets her neighbor 🙂
Office. A mini-event with the employees. A big date scene with the investor.
VIP-Escort. New options during the date with the investor if Monica is working in the escort service. An additional scene with Linda’s punishment (extra version)
Victoria. Continuation of the friendship between Alex, Victoria, and Melanie 🙂
Shiny Hole. Two dance battles with Molly and a catfight between them. Monica becomes the queen of Shiny Hole! (3 additional dance poses in the extra version)
Slums. A scene with the drunk. Monica tries vodka 🙂
More bugfixes

Fashion Business: EP2 v12 has been released!
Hello!
Welcome to the new update for the famous Fashion Business!
In these trying times, a lot of people delay their projects, but I’m doing my best to stay on pace so I could keep the game’s fans happy!
During the development of this update my work station’s video card died, I had problems with my router, the power went out a number of times, I had to reinstall the OS, my render station hanged up and so on…
Still, I did my best to resolve all of those problems as quickly as possible, so it didn’t affect my work in any significant manner. ?
I try to stay one of the most stable developers and I hope I can continue doing that in the future!
Anyway, what’s new this time:
Melanie: She’s trying to uncover Victoria’s secrets. Will she be able do it?
VIP Escort: New scene. Family drama ?
Philip: Extremely hot and highly-animated threesome scene. (extended version with ass-to-mouth animations available in the extra version)
Office: New ways to entertain Daddy ?
Shiny Hole: Beginning of private dancing for the pub’s patrons.
Julia: Last part of the “panties color” quest. What will come of it in the future?
House: Bardie’s new tricks. Seducing Ralph.
Revenge Quest: Continuation of the story.
Fixed and improved:
A bug that caused crashing during the scene with Melanie.
Achievement update bug.
Problems with story quests if you spend the night in the slum apartment.
The problem of breaking quests when the right mouse button is pressed during the dialogue. A lot of mystical bugs are related to this.
The ability to reset Shiny Hole quests after loading v12 (you need to enter the pub)
The ability to send a crash log with one press of a button.
The translation engine was changed. Lower memory consumption. Faster game starting.
Show the game menu by long tap on Android devices.
Enjoy the game!
Yours DecentMonkey.

Episode 2 v11
A new regular update for the all beloved Fashion Business game is here!

A lot of new possibilities and hot scenes await you!

What’s new:
Public event. Monica is living in the high society. Many of her old and new acquaintances will meet her there. Monica will have to do her best to conceal her current situation.
New hot photoshoot.
Escort jobs. Two big scenes. A lot of H-content.
A new scene with Phillip
Shiny Hole. the first private dance.
Slums apartment. New place to live in. Bonus scene (Extra version)
A new chapter in the romantic relationship with Julia.
Revenge quest continues.
Achievements list is now a gallery (beta). Some scenes are still unavailable.
The Cheat menu is now available in all versions. (click on the painting in the former Monica’s room)
Fixes and improvements:
You can now skip to a designated day of the week.
Fixed a bug with inactive bartenders in the Shiny Hole.
Fixed the bug regarding the quest restart in the Shiny Hole.
Performance improved
Other minor bug fixes
Enjoy the Game!

Episode 2 v10
What’s new in Fashion Business:
Another long-awaited update for your favorite game!
This release contains 1000 of new images, 57 new hot animations, and around 2000 new dialogue lines.
I’ve worked hard on this upcoming update, which includes the beginning of the long-awaited escort storyline. Monica will finally have a new money-making opportunity 🙂
As always, high-resolution graphics will await you along with incredibly realistic animations!
What’s new:
Escort missions: Monica will gain a new money-making opportunity (Philip’s and the hotel employee’s offers), and then she’ll get hired as an escort.
Continuation of Bardie’s storyline: a new scene with Eric, Bardie, and Betty.
Continuation of the office storyline with Biff: a new scene in Biff’s office and an opportunity to develop the relationship with Biff (castings). The public presentation.
Relationship with Julia: a rather spicy relationship develops between Julia and Monica, maybe a start of something romantic 🙂
Shiny Hole: New developments in the relationship with strippers, intrigues and scandals. New hot dance with one of the strippers.
Fixes:
– Numerous bugfixes.
Changes:
Arrows that lead to the photoshoot pictures/dances you’ve already seenchange their look.
A number of new animations will be exclusive to the extra version of the game, along with Molly’s dirty trick, concerning Monica’s panties.

Episode 2 v0.9
Hello!
I’m happy to announce that a new version of the game liked by many has been released!
This is the best update it’s ever had! Check it out for yourself ASAP!
What’s new:
Continuation of Monica’s and Bardie’s story. You’ll get to know what Monica has to do to solve Eric’s college problems.
You’ll also get a chance to play as Melanie: move around the city and visit your apartment. There’s also a new big event with Monica, Melanie and Victoria. And more amazing scenes, including an exclusive photoshoot, featuring Melanie.
Continuation of Julia’s quest. Monica will have to do her best to complete Fred’s request. Many new events with Julia, Monica and office workers.
Monica can now earn more money, dancing in the pub. New events in Shiny Hole! You’ll get to meet strippers Molly and Claire. New locations, a whirlpool of events, rewarding new dancing mechanic! 30 animated clips and 8 music tracks!
The beginning of Revenge Quest.
A cheat menu for the extra version (check the painting in Monica’s former bedroom), the addition of even more animated scenes, and an exclusive topless body oil scene in Shiny Hole.
Bug fixes and overall performance improvement.
The latest release contains more than 1250 new images, 73 new hot animations, and about 2000 new lines of dialogue.