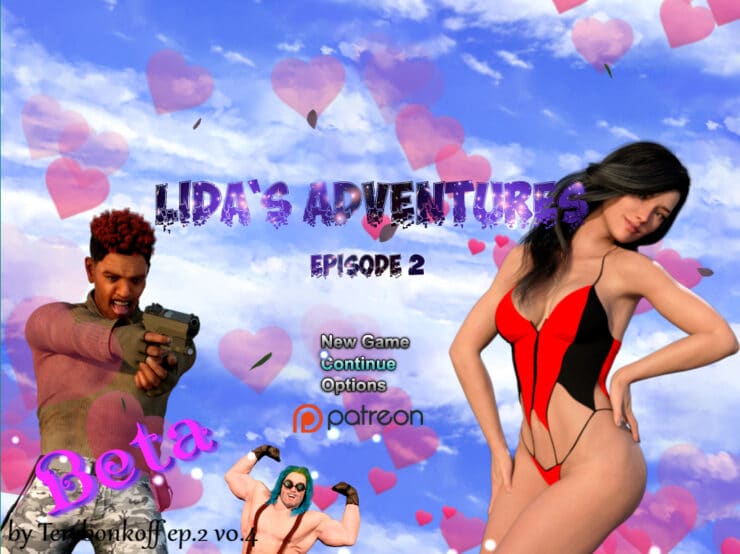 About game:
This story is about one family couple Lida and Dmitriy. Having lived happily in marriage for 5 years, Dima faced a fortune to get promotion at a new place. It goes without saying, that new job required reasonable changes in their lives, but at the same time a huge house with swimming pool and gym as a bonus. The only shortcoming – they had to leave their native town , friends and relatives for small American town. Also Lida was impatient to leave their rented house for their new mansion. She just had to wait until Dima would be introduced to new work and some details would be settled. But while she was busy with preparing a special dinner honoring that day, happened what she had never imagined, what has changed her life tremendously…

+ Changelog
Lida’s Adventures Ep.3 v0.182
I’m glad that I was finally able to master RenPy a little. It took a few weeks of hell until I learned how to work at RenPy. And most importantly, I was able to adapt the game, make recognizable locations from previous versions as well as characters. But I’ll tell you frankly, I liked it all, even though I failed on the first attempt. I managed to learn the basic mechanics of this engine and establish normal operation. I will tell you right away ahead of time, as there will definitely be such questions. I will soon add a Quest Log to the game, I am already in the process of solving this problem, as well as new content, some locations or buildings are now closed, as new scenes will be available in them soon. Also, the size of the game will decrease significantly. Now I did not waste time on compression, in order to avoid errors.

Lida’s Adventures Ep.2 v0.98
I have finished working on the 0.98 version of the game. There are a lot of new scenes in the game, and I also focused on adding more videos to the game, I modified the old plugins and removed a lot of small bugs.

I managed to add the ability to view previously completed scenes to the game. But since there are almost 7000 renderings and videos in the game, I have managed to add most of the videos so far, as well as some scenes and comics, including a comic about Halloween. In the future, I will try to make this function the same as in the first episode of the game. The scenes will be available for viewing as they progress. Currently, viewing scenes is only available at the very end of the game. I will be finalizing and updating this feature in literally the next few days. It won’t take long.

– improved the plot of the game and fixed some inaccuracies that were present in the game earlier;
– updated quest with a Hobo;
– added scenes at the farm, at school, in Westward, on-location Street.

– patch used about 500 new renders;
– more than 3 animations were added to the update;
– improved rendering quality;
– added 9 new locations.
Note! Do not look that version 0.8.5 is indicated! The author just did not change it.

New scene:
– in the cell scene in the lab with Selina, Lida, and Dima;
– scene with Sam (the endgame line of quests with Sam and his friends. Location Abandoned house );
– the scene with Hamper (the development of the quest with Hamper in the shower);
– scene in the barn (with the farmer).

Lida’s Adventures: Episode 2 v0.8.5:
What’s new:
– the update used 680 new renders;
– more than 8 animations have been added to the update; – render quality has been improved;
– completely redesigned the scene in Glory-hall, where version 0.7 ended, it added new renders, rewritten dialogues, fixed a bug that constantly appeared during the passage of this scene;
– edited the scene on the first floor of Glory-hall that preceded the final scene;
– before Lida goes to Glory-hall, added a scene next to the Sex shop;
– from an NPC in the city and the school added the dialogues that will occur when confronted with them in a dialog box format mini;
– added six new locations;
– locations Westward, long street, Street, Shop and area, Shop and Office, Red light district increased and became more diverse;
– changed cars and motorcycles, they became more on the roads and they are now more diverse than they were before;
– the game has the opportunity to die from a car hit, from gas, etc., so be careful and save more often;
– when harming the main character, his health is restored gradually. In the future, I plan to make the recovery of health when buying products in the store;
– move between locations in Westward, long Street, Street changed, now to move to another location, you need to go to the biker, the direction will be indicated next to it;
– trees in these locations are animated, added smoke effects in cars, added glowing signs and tabloids, added lights and traffic lights;
– in locations of the Farm, the grounds of Lucas, the territory of the Hunter added woodland animals, birds;
– added sounds of steps on the road and on the grass when moving the character;
– added clouds;
– changed the characters of Lida, Selina, Hobo, Farmer. Characters Lida and Selina have clothes that now correspond to clothes on renders. Also replaced the characters of the rest NPC;
– the game added a lot of audio themes;
– Zoophilia and Whoredom values
now work correctly, they are added with the passage of each corresponding scene;
– the school added a scene in the art class, where Lida poses for students.

Bug fixes:
– fixed a common bug that said some pictures were missing from the game. As I said before, this is due to the presence of Russian letters in the file name;
– fixed more than 200 serious bugs;
– fixed bugs with weather effects;
– fixed a bug with the clothing of the character in the school, which had arisen in the office of the Director;
– fixed a bug with big ray and the woman from the Bank who appeared on the Street near Lida’s house;
– fixed a bug where a woman from the bank appeared a day earlier than needed, and thus game lost a large number of quests and scenes;
– fixed a bug that occurred in laud hills when trying to enter some houses;
– fixed bugs where the character could enter the walls and roofs of buildings;
– corrected the appearance of new/active quest icons, previously some icons of the active quest appeared untimely, or did not disappear after completing the quest;
– fixed a bug where Costello didn’t show up at the casino to send Lida to Glory-holl;
– corrected dialogues and corrected those places where the Russian text appeared.

Lida’s Adventures: Episode 2 v0.7:
General:
– recycled more than 2 thousand renders, better quality, they became more contrast
– in the near future, the render data will be updated in the cloud storage of Google disk, a link to it will be available to platinum patrons
– removed minor bugs
– fixed getting stuck in textures
– added day and night change, now when evening comes you will need to go home from work
– in some locations added animated trees
————————————————–
School:
– added icons for all classes
– redesigned the entire line of art class quests
– redesigned the entire line of quests sexology class
– redesigned the entire line of quests in the medical room
– added one more day in the nurse’s office
– in medicine class and class sexology added and updated dialogs and added the renders, which was not there before
————————————————–
Farm:
– reworked quest with harvesting, now planting vegetables does not require additional confirmation
– reduced amount of water for animals, now instead of 5 there will be only 3 drinkers for animals
– watering vegetables is no longer required
– added a well for drinking troughs for animals
– added icon of home
– now after employment in the school is canceled daily work on the farm, you can immediately start the main work
– added missing quest icons over important events, now it will be easier for you to find the necessary to complete the quest
– changed some 2D character models, now they correspond to 3D models
————————————————–
City:
– changed signs of all buildings – a Garage and Car Show, Photo Studio Cloud, Red Admiral, a Bank, a Hotel, a Circus, a Church, an Electronics store, the Red light district, Glori Hall, a Sex Shop, Bar, Supermarket in Shopping area, Grocery store, restaurant Beijing duck. Now you can easily find the house or shop you need
– the city improved the visual component
– open underground casino, where you can play on the slot machine, also added to the shell game, similar to the ball game under the glasses. Now you can how to make money, and so they lose
– in the casino, you can go only after the main work
————————————————–
Bus:
– fixed a bug where you couldn’t get home without money, now you can do it on foot
– added a marker of your location, you now always know at what stop are
————————————————–
Beach:
– the location has been completely revised
– added many NPCs you can interact with
– reworked the entire chain of quests on an abandoned beach
– fixed with quest hiding in the bushes, when you are now well hidden, your character will not be visible and the NPCs will not be able to find you
– added dialogs as well as missing renders
————————————————–
Kidnappers ‘ house:
– added and updated character dialogs, and added renderings that were not previously available
– minor changes to the house
————————————————–
Quests in Lida’s Adventures: Episode 2:
– added new quests with a girl with blue hair
– added new quests in Glory Hall
– redesigned and added new renders of the quest, “Sam’s Room “
– completely redesigned and added new renderings to the circus quest”
If you have any questions, please send them below or send me a private message.
Your Tereman