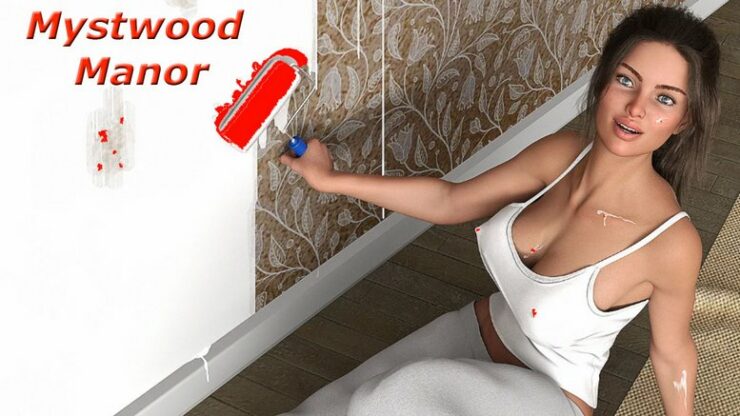 About game:
New game from the creator “Man Of The House” (Faerin). In ancient woods the realms collide and thus the veil wears thin. Spirits dwell and dreams shall haunt all those who stay within. So take great heed and turn away when myst devours your sight. Lest you get caught and forevermore lie trapped in endless night.​..

+ Changelog
v0.1.2
• Added Riley as an unlockable staff member.
• Added Kay as an unlockable staff member.
• Added the first 3 events for Riley.
• Added the fitness center and the corresponding outfits.
• Added the sauna and the corresponding outfits.
• Added the maintenance room and the corresponding outfits.
• The maintenance stat will now unlock as part of the story.
Gameplay/UI:
• Added image galleries to each of the character profiles. Whenever an image is added, a camera icon will appear and a shutter sound will be played. (Right now only the working images are added, in the future, this will be expanded).
• Updated the level 2 guest requirements.
• Added guest dialogs for the sauna and the fitness center and their corresponding outfits, as well as several new activities for level 2 guests.
• Removed the confirm button on the activity, check staff, and check guest screen. (So you can now just click once.)
• Added a back button to the activity, check staff, check guests, and map screen. (To make up for the loss of the confirm button.)
• Increased the update speed of the satisfaction bar to a set time interval (please let me know if it’s still too slow for you).
• I have rebalanced the guest rewards and room costs to reduce the grind. Leveling up the hotel takes a bit longer now, so you should have enough money to continue construction as soon as you get to level 2, allowing for a smoother progression. (Please let me know if you think the costs/rewards should be balanced differently.)
Mystwood Manor Bugfixes
• Fixed a bug causing you to get a blank card from Isabella.
• Fixed several minor bugs.
Upcoming changes in the next update(s):
• Skip tutorial.
• Destiny points (and exchanging them).
• Achievements.
• Splash screen.
• More locations to explore.
• More girls to hire.
• More guests.
• More special events.
• Attribute events.
• Further balancing of the costs and rewards.

Full version only:
• Added the beginnings of the cheat console (open to menu to access it). For now it’s just a cheat for money, but more options will be added in the future.

Mystwood Manor Bugfixes
• Fixed a bug that caused a freeze when the satisfaction was shown.
• Fixed several bugs in guest dialogs, causing freezes for some users.
• The selected guestlevel is now remembered correctly when you change screens.
• Fixed a lot of minor bugs.

v0.1.0
Here’s new release!
I’ve managed to do a lot, but it took a lot more time than I anticipated to add all the guests, outfits and rooms.
So I wasn’t able to add all the events yet.

For that reason I have decided to spend the next month on doing nothing but renders and new scenes, to fill in all the blanks (guests events, girl progression events, new outfit levels, etc.)

Note: You will have to start over, as I have made several structural changes.
I expect that this (or the next version) will be the last time restarting twill be required.

I hope you will enjoy the update and look forward to your feedback.

Rebalanced all costs/rewards to reflect actual gameplay.
Adjusted the tutorial and the starting amount according to the the new balancing.
You can now choose the “check on guest” activity to unlock their stories/hints/rewards. Right now this is just a placeholder dialog, but these events will be added in the next updates.
Added the wages screen: at the end of each week you will be able to choose which girls to hire/fire.
Updated the hotel attribute upkeep system: the icons now show the current attribute value, if you mouseover you will see the projected value.
The hotel level tooltip now shows the required reputation for the next level.
Staff members can now gain experience and their skills can level up (this is explained in the updated tutorial).
Added a guest level selection to the lobby (this is unlocked at level 2).
Added the first room upgrades for the lobby, kitchen en restaurant and bar.
When a new guest enters the lobby, you can now see the current guests as well to make it easier to determine if you want to check in that guest.

Fixed a bug with saving on the activity screen during the tutorial.
Fixed a bug when replaying Julia’s late night visit scene from the staff progress tab.

Upcoming changes in the next update(s):

v0.0.5
Here’s the new release. In this version most of the tutorial and management mechanics are completed. After unlocking Amber, there isn’t a lot to do yet, but starting next update you will be able to receive more guests, go up to the next hotel level. and build some new rooms (and of course, see the corresponding scenes and outfits).
Please note that previous savegames will not work, but you can now skip the intro if you don’t want to play through it again.
This was the last update that needed a lot of coding for a while. The base mechanics are implemented, so starting next update we will finally leave the “demo” phase and get to the “real thing”. It will be the first big content update (v.0.1.0) and I expect it to be finished in 4 weeks from now!
Story:
Finished to hotel management introduction.
Added images and outfits for all current scenes and rooms.
Amber can now be unlocked as a staff member!
Added the first “real” guest.
Added the renders for two new rooms, the restaurant, and the bar.
These can not be unlocked yet (as you need hotel level 2 for that), but this will be possible in the next update.
Gameplay/UI:
Added an option to skip the intro, you will get a random starting tarot card.
Added a button that hides the UI.
(Auto and skip will be icons in a later update, there will also be a dialog log.)
Implemented the progress tab on the staff profile, showing all special events for each girl.
Right now, it’s just the nipple slip scene with Julia, but more will be added next update.
Added collectible rewards for each set of progression events.
The first tier and its rewards for Julia should be available in the next update.
Added a replay option: Click any completed progression event to view it again.
Finished the guest encounter, now resulting in a satisfaction score.
If you fail to reach the required score, the encounter for that guest will fail.
When you fail 3 times, the guest will leave the hotel without paying.
Implemented guest check out. If a guest completes their stay, you will get the rewards listed on the guest profile.
Implemented hotel attributes (so far only housekeeping will be visible, the others will be introduced later in the story).
Added tooltips for all stats and most navigation buttons.
You can now save on the activity screen as well (and at night).
Updated the staff, guest and room tooltip designs.
Added a Spanish translation.

v0.0.4
Story:
• Added the hotel management introduction and tutorial.
• Added the first event for Julia (more will follow in the next update).

Gameplay/UI:
· Added a completely new UI design, with sound FX and animations.
· Implemented exploration mechanics (more events will be added in future updates).
· Implemented the first part of the hotel management mechanics (I hope to wrap this up in the next update).
· Added saving & loading (each profile will have a maximum of 10 slots).
· Implemented save encryption.
· Added a difficulty level select: “normal” & “hard” (they will not yet be unlocked in this update, but will be implemented in a future release).
· Ctrl (during dialogs) now only skips unseen dialog (unless specified differently in the settings).
· Ctrl (during hotel management) now speeds up sound and animations, in case you want to skip through it.
· Previously seen dialogs and selected choices are marked gray (this will not work for previous updates, but starting now).
· Added a hands-free “auto” mode with a configurable timer in the setting.
· Added screen transitions.
· Added the settings screen to the main UI that can be opened with ESC or the top right menu button.
· Added translations for German, French, Russian, Portuguese and Chinese.
· Added mod support.
· Tarot cards now show a description of their effects when you select them.
· And a LOT more minor improvements.

Mystwood Manor Full version only:
· Added 5 tarot card “rerolls” to the FULL version.
· Added 2 additional difficulty levels: “story mode” & “nightmare” (they will not yet be unlocked in this update, but will be implemented in a future release).