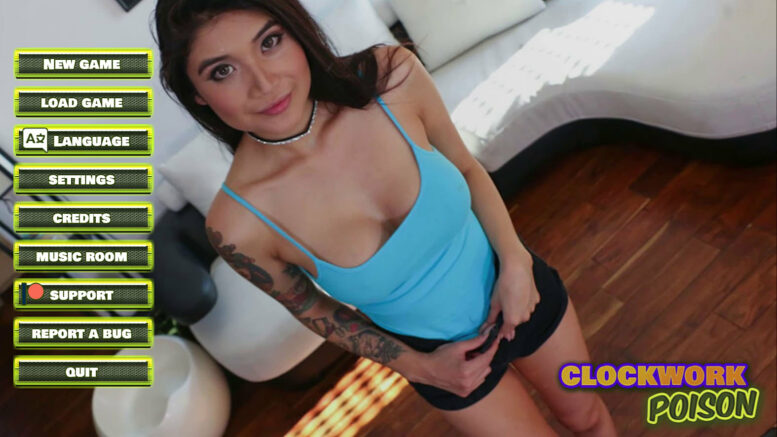 About game:
Clockwork Poison is a 2D sandbox project that features real scenes with real models, enveloped in a truly rich plot, full of adventures, joy, anger, misery, victories, defeats, revenge and, above all, passion and lust.
You play as the only male survivor to a chemical attack over your town, and will have to disover what and who caused the disaster and, eventually, escape the town…

+ Changelog
v0.9
– Added two new characters
– Added two new locations
– Added many new scenes for both new and already known characters. Note that you won’t be able to watch all the scenes in one run from now on, as the story varies depending on your choices
– Changed the textbox and the transitions between images a bit to improve the reading experience
– Fixed some typos

v0.7
– Added four new characters
– Added seven new locations
– Added another map. IMPORTANT: when this map is triggered, the player will get trapped in it, since you will have to progress through it without going back to the main town, but this version does not contain events in it yet. Please, consider doing the new side tasks available in this version before going further with Vic, Maya, Laura, Ember or Zoe.
– Added many new scenes for both new and already known characters
– Added another minigame to train charisma
– Changed the name of ‘charmness’ stat to ‘charisma’
– Changed all the sleep-at-girls’-homes events so that now the first sex scene counts as completed even if you don’t have sex, so the next times the player sleeps at their home, there will be a random event, as usual.
– Fixed a bug where the player might lose the car forever if they buy an improvement at the workshop and, in the same night, they use the Internet at home
– Fixed some typos

v0.6.3
– Fixed the Russian translation for the town maps

v0.6.2
– Added Russian. Please, note that both the inventory items and the tasks that are already added to the game will remain in English even if you start a new game, unless you are a new player who never played the game or you delete the whole Clockwork Poison folder in your %appdata%\RenPy folder. Thanks Modg for the translation
– Fixed some typos