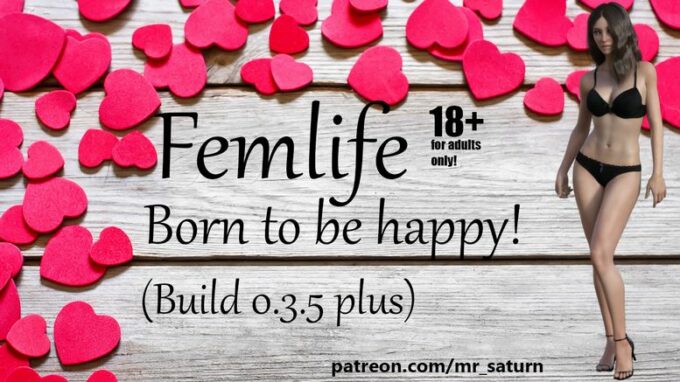 + Changelog
v0.10:
– Added the “Easy Job” quest. To start the quest, you need to call Albert after Violetta has been in the role of a victim in the Meat Hole club.

Depending on the choice of your actions, scenes are available during this quest:

– Sex with a new character named Igor Petrovich(Anal or vaginal, rough or normal sex).
– Sex with a thug.
– Lesbian sex with Paulina.
– Other scenes and consequences of your choices.

v0.8:
Due to global changes and additions, old saves do not work in this version. IT IS NECESSARY TO START A NEW GAME! I apologize for the inconvenience caused.

– Added a show at the Meat Hole club. After going to the beach with Paulina come to the restaurant and sit down at a table. The event will begin.

– Added a second show in the club.

– Violetta will be able to become a victim in the club.
(Read the guide in Storylines – Paulina, Albert.)

– Added automatic use of perfumes.

– The fucking shower gel has been removed from the game. It is enough to buy razors for shaving.

– The sperm on the face now dries up not in a day, but in about an hour.

– Added cheats: “Instant cure of syphilis”, “Remove sperm from face”, “No need to shave”, “No need to take a shower”. I haven’t tested it, but I’m sure everything is working fine.

– Olesya`s storyline has been continued:

1)Lesbian games
2)Olesya in Glory hole
3)You can buy new clothes for Olesya. After buying clothes, new events with Olesya will become available.
4)You can go to a nightclub with her.
5)You can offer Olesya to work as a prostitute on the highway.
6)You can arrange a meeting with Vitaly.
All the details are described in the guide on the storyline of Olesya.

– Added a couple of scenes with Sveta Sunduchkova (They appear during lesbian games with Olesya).

– Now Niko does not dismiss Violetta.

– The storyline of Niko is continued.

– The storyline of Katka(pornstar) is continued.

– The storyline of Olesya(hairmaker) is continued.

– Added a guide to the storylines of the characters. In order for it to appear.

v0.5:
– Added content with pregnancy (there is a cheat for instant pregnancy).
– Semen stains on clothes and stockings.
– Fixed some identified bugs.

v0.3.9
— Added a job as a prostitute in GloryHole.
— Added events with Ilya. After getting acquainted with the company Olesya, you need to work as a prostitute on the street. After Ilya finds you engaged in prostitution, you will need to call him, he will invite you to his dorm for a conversation. Then he will periodically call and invite you to visit.
— If you have collected enough dirt on the Ant, it can be blackmailed. You can extort money from him every day, or ask him to settle the problem with Ilya.
— In a fashion agency, you can do escort work. Requirements: high sexual skills, high intelligence. In the beginning, you will need to pass a sex test. At the moment, there is an «Intimate Dinner» scene.
— Added «Book Cafe». You can read books and develop your intelligence.
— You can meet a rich man in the restaurant.
— Added an intelligence cheat in FemLife.

v0.3.8
— Added a hangover. You can endure it or drink alcohol.
— Added courses for hairdressers (DK T. Shevchenko)
— Added a job as a hairdresser:
— Hair salon in the Residential sector(required skill 25)
— Beauty salon in the Northern District(required skill 75)
— Added NPC in FemLife:
— Olesya, a work colleague at the hair salon (on the third day of work, offer to drink beer, after that, in the Residential sector, after 17:00, the icon of her friends appears.)
— Dima, Olesya’s boyfriend (no events yet)
— Sveta, Olesya’s friend (no events yet)
— Ilya, a guy from their company (no events yet)
— Kolya, a guy from their company (there are several events)
— Added the «Basement» location. The key to the basement can be stolen from Kolyan (Ant).
— Added the «Garbage Dump» location. Here, Violetta can collect empty cans or have a meal. There is an event with a bum.
— Hypnotherapy sessions have been added to the psychiatric hospital. You can completely get rid of squeamishness and choose the level of depravity.
— In the center of the Factory district, a hair salon has been added, which can be rented and receive a daily income.
— In the pharmacy in the Residential sector you can buy medical alcohol.
— In a pawnshop, you can now sell not only jewelry, but also personal items(including clothing).
— You can collect mushrooms in the forest. You can sell them on the highway or eat them yourself.
— Added a point for receiving empty cans(the center of the Factory district).
— «Druzhba» cheese was delivered to grocery stores.
— Added the location «Emergency House» (the center of the Factory district). You can live there… There is an event with local homeless people.
— Violetta may become an alcoholic. She will be tormented by a long withdrawal syndrome, the body will constantly ask for a dose of alcohol. Violetta wouldn’t get a decent job, no decent man would want to fuck a drunk. However, she will still be able to fuck with friends-alcoholics and bums, collect cans, feed from the garbage, buy medical alcohol.
Violetta will be able to seek help from a narcologist in a mental hospital.
— Added a company of drunks(Factory district). After getting acquainted and drinking together, Violetta will be able to spend the night with each of them. At the moment, there are a couple of events.
— Added a scene at a porn studio. Glory Hole in FemLife.

v0.3.7.1:
– One scene (at the moment) of prostitution in a restaurant. This happens randomly. To do this, you need to look like a prostitute (Sexy girl outfit + stockings), sit at a table, eat and drink wine.
– Violetta doesn`t have her own apartment. She can rent an apartment. If Violetta didn`t have the money, she could pay the rent in another way…
– Added the need to wash your hair from time to time. It is possible to buy a hair dryer and dry your hair with it.
– Added the need to shave armpits.
– The added sensitivity of tits
– Added the ability to do pedicures in FemLife.
– Reduced the requirement of depravity level for prostitution and filming in porn.
– Fixed bugs from previous versions that my patron Karol Smolinski found. Many thanks to him for his help!

Build 0.3.7:
– Sperm on her face. Now the main heroine can stay with sperm on her face.
– Added set of underwear and stockings.
– At the beginning of the game, the main character’s face is covered with pimples. You can get rid of them in a beauty salon(Northern district) or with sex(this will happen after several times). Or you can use acne cream.
– Fixed bugs that I found during testing in FemLife.

v0.3.6:
– Relationship with NPC by the name of Andrey. You can meet him sitting on a Park bench(randomly). You need to call him)) After a few dates(one date a day), he can be invited to cohabit. Andrey can move into your apartment. Available sexual content: sex on dates, if Andrey lives in your apartment-sex in the room, sex in the kitchen, sex in the bathroom. I will continue to develop many aspects of relationship with him.

Build 0.3.5 Plus:
– New location. Relaxing massage parlor. You can get a job there. In addition to massage, you can fulfill additional client`s wishes for an extra fee. (It is located in “1st North lane”)