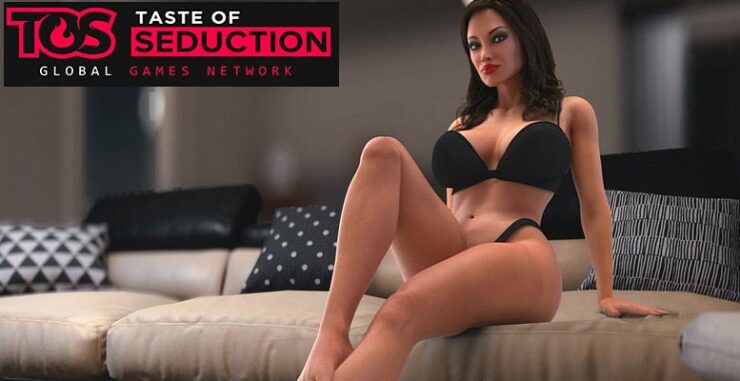 About game:
Taste of Seduction is a 3D high-quality, first-person, story and dialogue-driven RPG adult game that blends together themes such as college life and that of a spy adventure. You play as Devlin, a young adult who has the ultimate goal to solve the mystery of his father’s puzzling disappearance. Before doing that, you first have to manage to balance your hectic college life, annoying family dramas, and the difficult challenges of growing your own business. How do you do that? Making unlikely friends, amassing impressive capital, and bedding a dazzling number of stunning young ladies…

+ Changelog
v0.2.5
– A new mission, Devlin Captivus ( Since in version 0.2.4 there were some issues with the sleep system and missions were crashing, we thought we’d come up with a bonus for this inconvenience, a way for us to apologize! )
– We solved the sleep problem, when you couldn’t go to sleep and the missions and the game would crash
– On day 6 we added to the list of missions, the step where you have to go to the courtyard to talk to Mia to make everything clear, there are people who get stuck at this step
– More slots for the game’s save system plus changes to the save system, it’s much more stable now. ( Previous saves no longer work on this version, unfortunately you have to start the game from the beginning )

v0.2.4
– A new location, the park
– New missions
– A new sex scene ( It is not finalized, for the final version on Steam we will come with additions )
– More slots for the game’s save system plus changes to the save system, it’s much more stable now. ( Previous saves no longer work on this version, unfortunately you have to start the game from the beginning )
– Bug fixes
– Reworked objective progression ( Tiredness meter )
– New items in inventory

IMPORTANT:
As mentioned above, the rescue system has been reset. Updates have been made to the rescue system, and it is now much more stable. We know this is unpleasant, but you have to take the game from the beginning, we apologize for this inconvenience.

Taste of Seduction continues development and we aim to officially launch the game on Steam by the end of the year, January at the latest. The final game will receive several updates, including improvements to older missions or sex scenes. There will also be some new missions and sex scenes in the version we release on Steam. We want this part that will be released on Steam to be part I, and if the game is successful we will release part II, because the story has a sequel and the game can be developed a lot. It will all depend on how much interest there will be for this project, we want to take it to a more developed level and enjoy this game together. In the final phase, voice over will be added to absolutely all dialogues for a more realistic experience.

If for some reason, one of the game’s saves didn’t work for your first Police Officer Roberts mission, then we recommend you try another save. After testing, it has been noted that some saves can cause problems with the new update, so if you want to enjoy the new content added in this build, and it doesn’t work for you, we recommend trying another save.

We will continue to work on the development of this game, and we expect to release the game in final form on Steam by the fall. We still have a lot of work to do to add more details to the game, missions, sex scenes before it will be in final form. Now as you know it is still an Alpha Build, and it is not its final form. We will be adding more details and improvements including old missions of the game that were released at the beginning. So, until the final form of the game we still have a few months to work.

v0.2.2
– Added the police station and Officer Roberts
– We continued with the development of the main story of the game – unlocking the mission “Smooth Criminal”
– A sexual element has been added to the strip club. You can go up to any of the three dancers for a blow job in a surprise spot in the club. ( Sandbox element – does not affect the main story of the game )
– A lot of fixing has been done. For example in the previous build there were a lot of problems in the club with the clothes going through the leather, now they have all been fixed, also if you moved away from the models in the club they lost quality, this problem has also been fixed plus a very long list of fixes.
– UI size changes
– Bake and clean lightmap (Lots of black spots have disappeared from furniture)
– All female models in the game have had their hair altered. In the past the hair looked great except there were big performance issues if you got close to their head or hair. That’s why we chose performance over quality. Now hair may not look as good, but it offers much better performance. Over time we want to optimise this process more, to leave the hair at high quality without affecting performance.
– The bug where Devlin would get up from his chair in the club and the camera wouldn’t change to first person and he would stay behind has been fixed.
– Added yoga mat – in quest with Mia
– The loading time of sex scenes has changed, they are now faster
– Fixed the bug where if you were in a sex scene and pressed ESC, the sex bar kept growing.
– Fixed the bug where the garbage in the pool appeared again on other days
– The list could go on, but there are a lot of technical details that I don’t think you will be interested in. For the most part there have been many improvements, fixes and detail changes.

IMPORTANT:
*Previous saves in this build will work. So you can continue the game from where you left off without any problems. We are still working on improving the save system, so this is not the final version.

*Little by little we want to catch up with the voice over left behind, but at the moment budgets do not allow us to do so. Also in the future we want to add NPCs walking on the street, cars to give a more realistic background. In the next updates we will also add NPCs in the police station, police cars in front of the station plus many other improvements and details. We also plan to improve the sex scenes. We want to add more cameras and angles from which to view the sex scene. Very realistic and well timed penetration sounds and moans plus other surprises.

*From the feedback we received from you we are aware that the desire is high to get to a sex scene with Charlotte, but you have to be patient. Charlotte is one of the hardest characters to get to, she is the icing on the cake. The story of the game is just starting to get interesting, we promise you that.

*The game receives improvements from one update to the next. We are aware that there are still many bugs to fix, but we know about them and we will fix them one by one. We are always trying to come up with an improved version for a more enjoyable experience. Our team hasn’t forgotten about the contest, but due to limited time, we will add it for May. Any bugs you find you can report here or on our Discord server.

* Also, in the new missions, you’ll notice that there is no voice over, not a bug. We have limited budgets, that’s why we haven’t added voice over and won’t add more until we reach a certain revenue threshold. The costs for voice over, employees in this company plus many other things are very high and we need your support to improve this game.

v0.2.1
– A new location, a strip club where you can interact with 3 entertainers (dancers) and drink lots of alcohol.
– A total of 15 new NPCs in the club
– A dumbbell exercise and knee bending system has been added to Devlin’s room to raise the status level.
– Bug fixes and performance improvements
– Plus lots of technical details behind the update

IMPORTANT:
* Previous saves will not be valid in this version of the game. To be able to interact with the strip club you must start the game from the beginning and pass the first day to unlock the club on the map. As we have said in the past unfortunately at this time we can not keep saves from one update to another. There are script changes and parameters that do not allow at this time to run old saves. Bugs and conflicts may occur. We are working on this and certainly when the game is in a more advanced stage we will make the saves work from one update to another. We have solutions to this problem, it’s just a matter of time.

* We know there are issues with clothes coming through the skin on NPCs plus many other improvements we need to make to the club, but this is still being worked on. We want to do a number of fixes plus new interaction elements in the club for the next update. We will also continue with the main story of the game. We will not neglect this aspect. It’s just that we want to come up with sandbox elements slowly.

* Also, in the new missions, you’ll notice that there is no voice over, not a bug. We have limited budgets, that’s why we haven’t added voice over and won’t add more until we reach a certain revenue threshold. The costs for voice over, employees in this company plus many other things are very high and we need your support to improve this game.

Fixes:
– Fixed the problem where on some systems the blackscreen appeared when starting the game
– Fixed the problem where FPS drops appeared in the first few minutes when you opened the game
– Performance optimization
– The economy has changed – it is more realistic (it is not the final version – during the updates we will improve this aspect more and more)
– Charlotte’s problem in the kitchen when she sits with the plate and towel in her hand and it goes through her dress is solved
– Mia’s yoga pose where her pants go through her skin, solved
– Added skip option to Yoga minigames
– There’s less of the black between Mia’s legs from the sex scene ( we’re trying to find a solution to make it go away )
– Plus many other functionality fixes

+ Developer Notes
If you have a crash check Nvidia Control Panel > Manage 3D Settings > Vertical sync: Make sure you use the 3d application setting.
Overclocked components may also cause crashes.