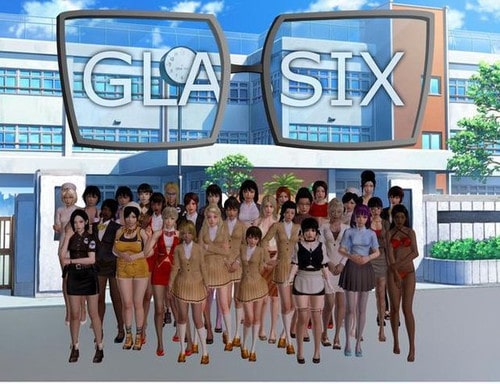 About game:
You follow the story of the protagonist, who picks up a suspicious item. These glasses allow him to see through his clothes and use some orders on his target to make them more susceptible to rather peculiar tasks…
Glassix is a project aiming to give you another way to enjoy custom made games. Glassix will focus on the story to let you enjoy a more classic visual novel game with point click elements…

+ Features
– 8 girls with unique kinks, more girls will be added later on
– Roam in the city and interact with the girls, the city is expanded little by little
– Obedience level 2 current max, level 4 will be the max
– Day 1 introduces the story and the 5 first girls
– Additional events and girls to discover in town after day 1
– City map interface
– Manage the girl’s affection and obedience to fit your need

This patch fixes important bugs with pathfinding for the new three latest houses (Iyo’s, Nabila’s and Daisuki’s). You should not be spammed with error message anymore

v.0.46.0
Added Nabila level 1
Added Daisuki level 1
Added slave pimping button in the girl status page, 3 girls max. Requires Slave mode and Devil’s Lust spells as well as having unlocked a specific event related to pimping.
Pimping girls using this new button now earns some money and sexen at the beginning of each day
Added 3 short daily pimping events for each girl
Added Daisuki’s house in Downtown Bakery and Bakery Street
Added Nabila’s house in Northside street H
Chinese translation updated by Darkbatex
Fixed bug with Iyo not sleeping at night (Thanks Peixe751!)
Soooo, I’m late again for this version, sorry about that. I’ve been swamped with web dev last month and it took me some time to catch up. Anyway, everything is back in order.

This new version includes 2 new girls level 1, thanks to CarpeNoctem for his hard work.

As for the new slave events, as said before, I decided to make it a bit different than the usual additional events. There is now a new button in the girl status page which allows you to order your slaves to pimp themselves automatically each day during their leisure time. This requires both the Slave mode and the Devil’s Lust spells as well as having triggered the first pimping event of the girl. This changes their usual behavior and instead of going home or go to their hobby places, they will instead go to the airport rooms and will spend their time pleasing customers there. This will earn you some money and sexen automatically each day. Only 3 girls at a time can be ordered to pimp themselves. There are 3 shorts pimping events for each girl, one for each room.

The aim was to make the mid/end game a bit easier with automatic money and sexen for players who don’t cheat (wait, do they even exist? Kidding :p I know some of you play fair ;P). This new daily income might need some tweaks though, I’ll wait for your feedback on it.

Finally, the chinese translation has been updated by another player, Darkbatex. So I’ve enabled the chinese language once more in the game. A huge thanks to him for his hard work. I know russian language has been requested too but since it has not been updated for so many versions, I’ll leave it out to keep things clean. Either a new translator shows up or once the game is completed, I’ll use some quick machine translations tools to complete all the removed languages. We’ll see.

Thanks again for your patience and support and let me know if you encounter any troubles with this version!
Enjoy!

v0.45.0
Iyo level 4 in Glassix
Added Iyo bad ending
Added Iyo good ending
Two bonus events for Iyo
French translation updated by CarpeNoctem
Fixed typo in Fujiko toilet event (Thanks Dregrin!)
Fixed incorrect variable change in Fujiko night event preventing second option to be unlocked (Thanks Dregrin!)
Fixed bug with Hanae’s vaginal event not displaying choices (Thanks Zeph!)
Fixed bug with Marylin lingerie set C not appearing in the item list (Thanks Zeph!)
Fixed missing character images during St Patrick’s event (Thanks Zeph!)
Sooo, this version was supposed to contain the first batch of new slave events. The plan was to create a new order for your slaves to have them automatically pimp themselves (once you unlocked the Devil’s Lust spell) each day so you could earn money and sexen on a daily basis, making the end game easier and giving a better feeling of really controlling your slaves. However, this requires some changes in the AI behavior so that the selected girls would go the airport to pimp themselves during their hobby time and at the moment, it’s a bit buggy at the moment. Since I was already late for the delivery, I decided to release this new version without this content and will instead push it to v0.46 with every girls at once instead of splitting the content in two versions like what I’ve been doing in the previous updates Glassix.