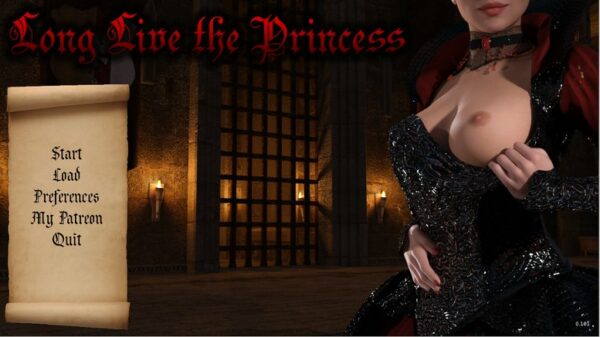 About game:
The King is dead. His daughter, Princess Selena, is set to take the crown. But something is wrong. Murder, backstabbing, and visions of extinction threaten to bring ruin to all that is good. And at the heart of it all is a tale of personal tragedy and lost love. You are a Truthsayer. Yours is the ability to tell if someone is lying. With your mentor dead, it is up to you to protect the Princess when she arrives in your hometown for her coronation. But a secretive old crone and her foul-mouthed pixie assistant have different plans for you. With a newly learned ability to uncover secrets and use them to your own advantage, you are tasked with getting close to Princess Selena to save her from her darkness. But to achieve that, you must practice by getting close to the women in town. Real close. And as you venture towards your destiny, someone is watching you closely…

+ Changelog
v0.39.1:
Fixed a crash bug when entering the Fairy Queen’s sex training menu at its last stage if you have less than 5 Perversity.
A few minor tweaks elsewhere.

v0.39.0:
Added three new sex scenes for the Fairy Queen.
Added new requirements that must be fulfilled for the Fairy Queen to accept your final proposal to her in the endgame. Old saves beyond the point of no return in the FQ’s story automatically fulfill these requirements.
Changed how events resolve if Primrose ends up in prison. If this happens, you can no longer get into a sexual relationship with her. However, Primrose having been in prison will no longer soft-lock you out of getting a good ending in the endgame.
You can now see the location of characters on the town map (but not on the wilderness map).
Fixed an assortment of annoying bugs and issues with the map screens.
Various tweaks and fixes.

v0.38.0
The night scenes for all the girls who have them (Evelyn, Primrose, Callie, Samarra, and Nell) are now fully implemented.
Updated all four existing night scenes to keep them in line with the rest of the game. Every image has been re-rendered, and every animation has been expanded and improved.
Added the Deep Sleep spell.
Implemented Perversity 6, which works differently from all other ability scores.
Removed Courage levels 5 and 6 from the game. They were no longer needed. This means all abilities are now fully implemented.
Expanded several epilogues to take the new possibilities from this update into account.
Completely revamped lighting in the Samarra/Nell night scene. Additionally, Nell’s skin texture was fixed in this scene.
Removed the ability to leave behind evidence at night. This early feature no longer fit the game’s theme and would have been very demanding to implement.
Various tweaks and fixes.

v0.37.0
Added a new quest to obtain and learn the Shrink spell.
Added a new sex scene with Belle.
Expanded the epilogue with more options and images for Belle.
You should now be able to admit your feelings to Evelyn even if you solve her secrets out of order.
Various tweaks and fixes.

v0.36.0
Added three new scenes with Callie featuring two new, mutually exclusive relationship branches to explore.
Expanded the epilogue with more outcomes for players who pursue Callie’s new scenes.
Callie is now romanceable and is another potential source of charisma.
Updated dialogues to reflect changes to your relationship with Callie.
Moved Evelyn’s charisma gain. It is no longer necessary to enter a relationship with her to gain charisma.
Various tweaks and fixes.

v0.35.1
Fixes situations where it might be impossible to visit the river location or the Leanan Sídhe in NG+.
Removes error message when training agility in NG+.
In NG+, hides books you have already read on your previous playthrough.
Various tweaks and fixes.

v0.35.0
New Game Plus is now available. Unlock it by reaching one of the game’s many endings. NG+ will be expanded in later updates.
The optional ability checks in the tutorial are now fully implemented.
Completely rebuilt the masturbation scene in the tutorial to make it at least somewhat appealing. This scene changes in NG+.
Complete overhaul of several sex scenes with new poses and improved visuals and animation. These scenes are:
– Evelyn’s goodbye
– Belle wakes you up
– Belle while watching the mystery woman
– Samarra’s first training session
– Callie’s nude fashion show
– Erato’s pathfinding training.
Minor visual and animation upgrades in Evelyn’s boobjob scene and the Fairy Queen’s BJ training. Minor visual update to Primrose’s boobjob scene.
Various other visual improvements.
Added a spellbook that shows learned spells and your remaining daily attempts at Invade Mind.
Added a to-do list that will help remind you of things you might want to do.
It is now possible to obtain a point of Charisma from Samarra even if you choose not to claim your just rewards after defeating her.
Most of the UI is now hidden during sex scenes. Please report any bugs you find that are caused by this change.
Fixed a bug that made one of Callie’s potential epilogues not appear. This fix might not work if you are already in the endgame.
Added progressive hints to the town hall puzzle. These hints appear after comparing the wrong facts too many times.
The Fairy Queen’s vision quest now allows you to ask Belle for hints as many times as you like. This is a temporary fix until I can rework the quest.
The first night scene with Evelyn is now optional.
Removed silver and gold pieces from the game. They still exist in the game world, but not as a game mechanic.
Remade and repositioned the button for toggling camera perspectives. It should now be easier to spot.
Updated to the latest version of Ren’py (7.4.4). You should not notice any differences. However, Windows XP is no longer supported and LLtP is now 64-bit. There is still a 32-bit executable included.
Various tweaks and fixes in Long Live the Princess.

The endgame climax: Added the final confrontation with Selena.
One new sex scene.
Major animation and visual improvements to Primrose’s boobjob scene.
The wilderness map has received a facelift. (Thanks to dango)
The save/load screen now shows page numbers above 9. (Thanks to Pendrag)
If Evelyn had left town, the endgame content in 0.32 would act as if she hadn’t. This has been fixed.
Patched in a clue you should have received earlier if you found a certain inventory item in 0.32. Fixes existing saves.
Various tweaks and fixes.

v0.32.0p
Added a hotfix for those having trouble triggering one of the new sex scenes.
Re-uploaded with a different Evelyn story to comply with Patreon rules.

v0.31.0 Endgame Part 1
The endgame begins: Added the events of the entire day before the coronation.
[*]Two new sex scenes.
[*]Official Android support with an improved interface and language for touch screens.
[*]Significant animation improvements to multiple older scenes.
[*]Added penis wetness to both new and existing scenes.
[*]Improved Callie’s dialogue scenes with new renders and more expressions.
[*]Standardized the capitalization of titles and professions throughout the game.
[*]Various tweaks and fixes.

v0.30.0
You can now cast Probe Memory on a certain princess.
[*]Rebuilt the sex scene with Callie’s customer to feature a new costume, lighting, and massively improved animation.
[*]Removed the Multiple Girls page from the scene gallery and moved its scenes to the respective girls’ pages.
[*]Various tweaks and fixes in Long Live the Princess.