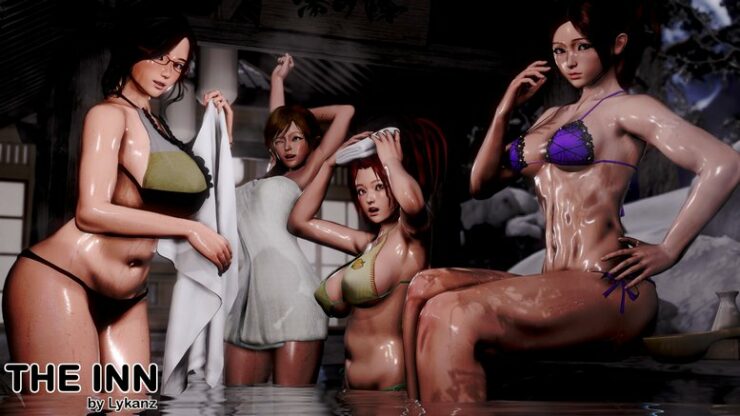 About game:
The Inn tells the story of down on his luck kind of guy. He’s been living by himself in the big city ever since his father kicked him out of his house at the age of 18. He really lives a miserable life… But it’s all about to take a 180º turn when he meets a certain person one night…

If it’s your first time playing though, I’d advise you to start from day1, as it gives a lot of background on characters and story.

+ Changelog
v0.07.10
-Polishing and Tweaking Update for 0.07
-Added Replays for all the important scenes for Joana’s day.
-Fixed some file structure issues with the Clothing Selection options in the Replay Gallery.
-Added a Commissions Gallery.
-Rework (yet again) the code for the Pin-ups Gallery.
-Complete rework of the music Gallery.
-Remade around 80 images for the Spa portion of Joana’s update.
-Items in all Extras Galleries are now displayed in groups.
-Added thumbnails for all events in Joana’s update.
-Reworked the Notification System.
-Fixed an issue where the game would crash during group SMS message before the movie night event if the player didn’t see Val’s message before leaving the spa.
-Fixed Val being in the bathroom when the player and Joana come back home from the stargazing.
-Reworked the Fetish Selection Screen.
-Added more useful info on the Save screen.
-New fetish added to the fetish list. (Futa)
-Remade 3 Day 08 animations that were, to be kind, pretty subpar.
-Implemented VN Mode throughout the entire game. (New Game Required)
-Revisited and improved dialogue flow.
-Replaced around 90% of the game’s music and sound effects.

v0.07.09
Ninth and Final Beta for 0.07
Conclusion of the events for Joana’s update
One new event
New options at the Replay screen
You can now unlock all replay scenes in the Gallery
Can do one more Movie Night at Joana’s house
1. Added a second location for saves in Android builds
2. Added a new option for Val’s path during movie night
3. Added conditional dialogue to Joana’s path during movie night
Added an “In Progress” visual hint to the girl selection screen that shows up when a girl day is still being developed

0.07.05
Continuation of the events for Joana’s update
2 new events

0.07.03
Continuation of the events for Joana’s update
3 new events

0.06.10
Polishing and tweaking update.
Profile Backgrounds, Pictures and Clothes for Cindy and Jessica.
Wardrobe code, icons and previews for Cindy and Jessica
New clothes added for Val (3 Clothing, 1 Swimwear)
New clothes added for Main Character (1 Clothing, 1 Swimwear (dependant on player’s choices))
Reworked the way the Wardrobe System works so clothing previews are displayed even if the character doesn’t have the required Affection, Lust or Karma points to wear them.
Revised Wardrobe System Tutorial to reflect the new changes.
Added Edgescrolling to the massage minigame (better late than never, right?).
Added missing Event Log Thumbnails for 0.06 events.
Added conditional navigation flavor text for the entire update.
Added replays for the entire update in the Replay Gallery.
Added Sound Effects and Background Music for the entire update.
Added a new field to the Preferences Screen that let the player change the speed in which the dialogue animation plays.

0.06.9 Release Post!
What’s up everyone?
So, after drought of nearly three months without any beta releases… Here’s the last beta for version 0.06.9!
As said above, this is the last beta for this version, the next release at the start of December will be the full, finished update!
As such, this beta comes with all the content for the update. You can play the entire update, from begining to end on this release!
This beta version comes with:

Also, this beta introduces a new build method.
Previously there was three releases: One for PC and Linux, one for Mac and one for Android devices.
With the new build method there are only two releases now, one for Android and an universal one for PC, Linux and Mac, streamlining even more the process.
As such, patrons that were able to use the in-game updater before won’t be able to do for this beta due o a change in the file structure. They will, however, be able to use it again for the next update.
I was also able to reduce the size of the Android APK even more and now, even with the new content for this beta, it sits around 1,28 GB in size!
Now, what’s NOT in this beta but will be in the full release:

One of those events brings some more backstory on Cindy and her relationship with Val and the other one gives us some insight on Val’s personality, showing a side of her that isn’t often seen.

This update also moves in to the last part of the weightlifting competition and to the final portion of the update overall.

v0.05 Full
What’s up my dudes and dudettes?
So, here we are huh? The day has finally arrived!
It’s with great joy that I bring you the official release of the v0.05 update for The Inn!
This update is quite special for two reasons:

1 – It’s the first update that brings new content to the game since November 2018 and the dreaded Halloween Special. Sorry for the long drought.
2 – To be honest, the technological jump that this update has from v0.04, or even from Beta 4, is astounding.

This update also brings major changes to game mechanics, image quality and QoL additions. I won’t talk about them here because that would only make this post bigger, but you can check the development update posts I made!

Also, while this update is fully compatible with saves from Beta 4 and you’ll be able to enjoy it to it’s fullest from them, I’d highly recomend you to start a clean, new game to enjoy all the new Quality of Life additions from the start.

The main element of this update is content for the entire Day 9 of the story. It comes with 9 events that span throughout the entire day (one of them even has 3 different variations)!

Beta 4 Fix1:
Fixed the issue some player were having where the game would crash to a traceback when loading saved games.

Beta 4:
Reworked the entirety of Day 8 in The Inn.
A LOT of fixes and polishing.