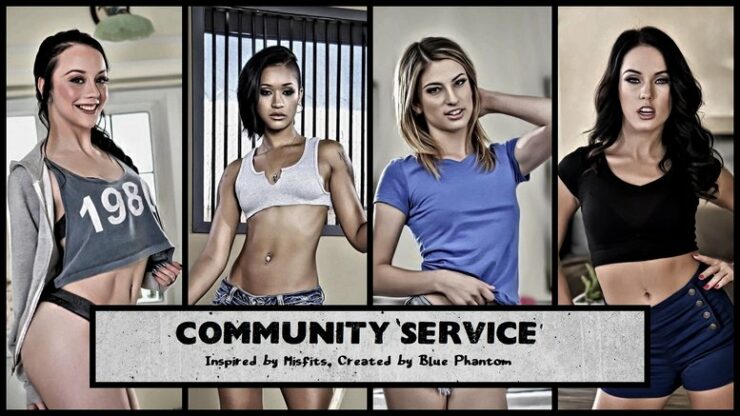 About game:
During your first day on Community Service, you and your fellow young offenders are caught in an unusual lightning storm. Shortly after, you discover that the storm has given you and those around you unique abilities, called Powers. But with the world rapidly adjusting to the change, and a dark vision of the future, what will you do?​

+ Changelog
BugFix v2.9.2
Removed the BuyMeACoffee link in the sidebar
Added a message to the Home Page and sidebar
Fixed an issue where old saves were not properly updating to v2.9.1

Font size has been reduced from 24px to 20px
The initial size increase was due to poor readability, which has since been fixed with dimmer backgrounds
Slightly altered the appearance of the sidebar
When the brothel is closed, the “?” now includes the rota details
Added an icon to the browser tab
In Free-Roam, character avatars now appear in place of names to indicate a character is at that location
The images have been shrunk to match the text, hovering over the avatar displays the name in text
Carolina’s Timetable has been changed so that she is now at College until 16:30
This has been done in order for the player to access her new event
Dee does not currently have a timetable
One will be added in the coming updates, until then she will permanently be located at her house

New Location:
Fight Club
Fast Travel is now disabled during community service
The Quest “Nobody Tells Me Nothin’” now auto-completes when Quickstarting to Chapter 2
Only characters you have met will appear next to location names in Free-Roam

v2.5.2:
Removed some “Rest A While” links
Player can now only rest at hub locations (e.g Estate)
Added a curfew
At 1:00am, a warning pops up to indicate the MC is getting tired
At 2:00am, the game automatically navigates to the sleep passage
Added autosave
The game creates an autosave as the MC wakes in the morning

Redesigned World Map
The layout is more compact than before
Interior locations are more easily navigated
Travel times have been adjusted
Fast Travel
An interactive map has been added to move between Hub Locations
Fast Travel is disabled during events
Fast Travel has a base 15 minute travel time
Most unavailable options are shown as greyed out
Clicking the “?” will give a hint as to why the option is locked
Players can now go to sleep from 18:00
Slightly redesigned the Rest Menu
Updated the character location tracker in the sidebar to include all characters
Some locations have been moved
Skin now lives in the Town Center
Lauren now lives in the Uptown Area
Alex B now live on the Estate
Character avatars now appear at all locations on their respective timetables
No new content has been added for characters at the new locations
Their avatars won’t be clickable and won’t lead to events or hubs
The avatars will unlock over the course of future updates as new content is added

Renamed several location passage names in the code
Renamed several resource image names
Fixed an issue where the events from the previous update were not advancing time
Player is no longer given access to Siri’s House during the End of Chapter 1 event
Siri’s house and her quest will be available with a future update
Moved the option that leads to the event with Lexi and Cory from Lexi’s Hub to Lexi’s Bedroom
Moved some easter egg triggers
They are on the same page, but their location on the page has changed
Removed all “Character is asleep” messages
When a character is asleep, they won’t appear at any location
Added a missing entry from the Power Dossier page

v2.3.1 – The Intimacy Update
Saves from v2.1.1 onwards will auto-update to the new version upon loading.

All Interactive Sex Events overhauled
New format
Progressive Unlocks
Added text and dialogue to each scene
Several source files have been renamed
Several UI adjustments
New backgrounds and reworked sidebar
Re-added the UI Toggle Button
Since the beginning, toggling the UI would make the entire UI bar disappear. This has now been fixed.
Changed the starting passages slightly
The majority of profiles now contain the character’s timetables
Some characters are unaccounted for, and so their timetables are unknown
Added some hidden easter eggs

Gameplay:
Updated Alex’s Timetable
After “Just Keep Swimming” Alex will attend the Support Group on Wednesday
After “Piss Off Ghost” Alex will visit the MC’s house during the weekend
Extended Community Centre opening hours
9:00 – 20:00
Community Service still finishes at 15:00
All Alli Sex Events have been updated to the current standardised format
Renamed all “Jen & Eric” in-game branding to “Jen N’ Eric”
Added coloured text in free-roam to mark when an action is part of a quest

Fixes:
The majority of the source files have been reorganised and renamed to bring them in line with the new quest format
The source files for Chanel and Veruca’s Sex Event have been moved to the “group” folder
General Typo/Spelling Corrections
Added a missing credit in the “carolina-sweets.txt” file
Added missing “powerName” code from multiple quests
Made some adjustments to “The Storm” Quest Code
Removed test images from the source files
These images were used for the Dialogue Demo, and have no effect in the main game

Changelog – v2.1.1 – The Quest Update
Old saves will NOT update to this version, you can quickstart to Chapter 2 from the start menu
You will need to redownload the source files due to filename changes
Content:
“The Storm” Quest Completed
Formerly called the End Of Chapter 1 Event
This event begins when all Chapter 1 Main quests are complete
This event ends with the Chapter 2 Title Screen
“The Vision” Quest Starts
This quest starts at the Chapter 2 Title Screen
This is only the beginning of the quest and will exit into free-roam
8 new images, 0 new videos
10’000 additional words

Gameplay:
All Events have been converted into Quests
17 Main Quests, 3 Side Quests, 3 Unmarked Quests
Due to the new method the game uses to track quests, old saves cannot be updated.
New Quest Tracker
Replaces the Notepad
Able to view active and completed quests
Updated the game’s Cover Image for Chapter 2
Added the missing background for Adria’s Interaction Hub
Changed Lexi’s Interaction Hub Images
Temporarily disabled the General Hints Passage
We are reviewing the content in the passage to see if it is worth displaying
Temporarily disabled the Tutorial Passage
We are currently reworking the tutorial

v1.10.1 – The Kristen Update
You will need to sleep in-game to apply these changes to an older save file.
This Update features an End of Chapter Event, the game will prompt you to backup your save before starting the event.

v1.9.1 – The MC Update
You will need to sleep in-game to update your save file.
It is advised that players replay the prologue to see some of the new content and get the full story.

New interactions with the Mirror Entity
Approach the Mirror in the MC’s bedroom to interact with it
Options unlock after the main character questlines are completed
Several edits to the Prologue
The later passages have been entirely rewritten
The MC’s power has been rewritten slightly and clarified
Several edits throughout character events
Most discussion around the MC’s power has been re-written to accommodate the new power description
New Character: Jennifer
Featured prominently in the in-game porn game Jen & Eric
Now a full character within the game world
Featured as part of the edited Prologue
New Character: Chloe
A background character with one repeatable event in the mall
New Character: Lily
A background character with one repeatable event in the mall
New Locations at the Mall
Cafe, Small Clothing Store, Big Brand Clothing Store
Activities
Side activities to pass time are now available at many locations in game
Home Kitchen, Home Bathroom, Estate Bar, Community Centre, Cafe, Clothing Stores
82 New Images, 23 New Videos
Approx 20’000 new words

Updated the Rest Feature
Removed the Wait an Hour option and Skip the Day option
Replaced with a Rest Passage where any amount of time can be skipped in increments up to 4 hours
New Location Mechanic
Main Character’s current locations are now visible in the sidebar
All other character’s locations can be accessed from the characters page
Some locations displayed are not currently available in game, but will become available in a future update
Some locations are available in-game, but the character won’t appear there until an event has been added for them at that location
Added a quickstart function
There is now an option on the screen to skip the Prologue and jump straight into Chapter 1: The Storm
If a character is not at home, you can no longer access their house
Each link now tells you how much time has passed
All Location travel links reviewed
Most travel between locations shortened to 5 minutes
Accessing a character hub no longer increases time
You can now visit the hospital from the start of the game
New Character Interaction Hubs
Riley, Alex, Cory, Haley, Peta, and Veruca
These interaction hubs will be used during future updates
No current free-mode dialogue
Significant update to game’s variables
Almost all variables have been updated or replaced
Removed the ‘Other Notes’ from the Notepad
These details are part of an older mechanic that is no longer being used

v1.8.2
You will not need to sleep in-game to apply these changes.

v1.8.1
Use the in-game sleep option when loading an old save (v1.6.1 onwards) before accessing new content

Skin’s Questline Complete
(5 new events, 3 story choices, 1 free-mode menu, 2 background events)
New Location : Underpass
(Featured in Skin’s Questline, no current free-mode content)
New Location : Community Centre Basement
(Featured in Skin’s Background Event, not currently accessible in free-roam)
48 New Images, 31 New Videos
Approx 10’000 additional words (Includes code)
Changed the method of updating old saves
Old save files are updated when the MC sleeps. Sleep before playing any new content. Has been backdated to saves from v1.6.1. Saves from before v1.6.1 cannot be updated.
Added hints to the undiscovered locations
(Hover over the text to view the hint)
Slightly altered the code for events 1 & 2 for Alessa, Skin, Kristen, Megan
The end of the event will exit to the Community Centre instead of the character hubs
Replaced the missing events-credits.txt file
Added the extra-characters.txt file

Updated the Date/Time widget to the most up to date version available to me
Fixed my errors in the code that was based on old information
Slight alteration to text style-script to improve clarity against background. Background code added in preparation for next major update

Reworked Sleep Code: You can sleep between 10pm and 7am. If the option to sleep is unavailable, you will be prompted to rest for an hour.

Removed passages that redirect player (These forced “goto” passages removed the player’s ability to undo/go back
Reworked Sleep: After choosing to sleep, the player will wake up and, if it is a weekday, will only be given the option to attend Community Service. On the weekend, the option takes the player back to free-roam
Reworked all code regarding time of day
Fixed an issue with a broken link

Prologue
Introduction to the Core Characters
Functional Free-Mode Map
Just over 10’000 words (Twine count includes code, so number may not be accurate)