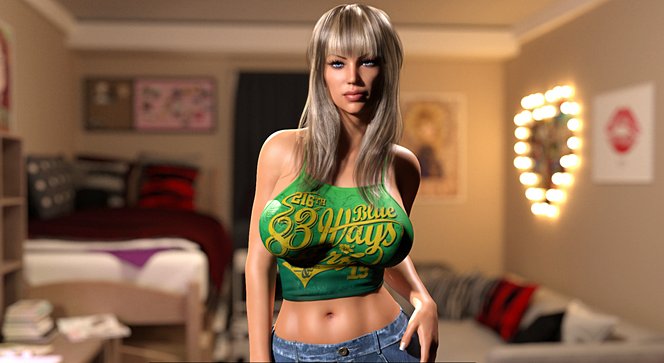 About game:
Nathan was sent to jail for cyber crimes his best friend commited, and tried to blame on Nathan. After a year, his best friend was caught, and confessed to everything, allowing Nathan to return home. Welcome home…

+ Changelog
v0.08.02
I fixed many many bugs, and did a major update to the UI.
I’ve changed the primary font.
No more confusion between 1 and 7.

Additional scenes for Becky at the friday night party.

New Save Engine in Loser

Additional scenes for Becky at the friday night party: If you’ve gotten your hands on different drugs, you can now give them to Becky directly and enjoy/suffer through the consequences.

New Scrounging Action in Parents Bathroom: If you don’t want to embrace unhealthy, but are ok with embracing the lazy lifestyle and want access to certain drugs, you can now raid your parents bathroom, and sometimes find stuff 😮

New Save Engine: This thing was a beast to put together. No lie, I had to tweak and recode numerous sections of code, multiple times through this dev cycle to get the new save engine to work. But it works now, and there are now 10 save slots rather than just three. That will most likely be the cap. Old save will still work, and are now located in the “Backup” folder.

New Inventory Function: I’ve been told repeatedly how annoying it is to have to change screens to see a characters Interests and bans, while trying to setup your hotbar for the day, so I’ve added a screen that you can toggle off and on that shows all Interests, and Bans for each character you’ve unlocked.

That’s it?
Unfortunately yes. I wanted to add in another Becky AT, but had to push that back, because her additional content at the party, and the save engine kinda ate most of my development time. There were numerous other things I wanted to add, but were also delayed due to how long the save engine took to get working properly. All in all without the new save system, (three weeks to develop + numerous bug hunts and tweaks) I could have aded in everything I originally planned, but…People had been asking for more save slots for a while now, and after making the SP2 save engine, I felt confident in making a much better one than what we had initially for Loser. So that’s what I did. Contrary to some claims, I do listen to feedback. 😉

v0.07.02 Public
There’ve been a few bugs that have interfered with saving, as well as a few other ods and ends. These issues should be resolved now.

What’s it mean?
2 New ATs for Diane – Due to $30 Patron support I was able to add two Diane AT’s this release.

New Location: Boutique – If you meet the requirements, you can now go downtown and pick yourself up something pretty.

New Location: Stripclub – Now if you’ve unlocked Lisa, you can visit her at her other job. Or just go for funsies.

New Job: Cashier – You can choose to work in the Boutique if you are so inclined to get a job in retail.

New Function: Temporary Reputation – Similar to daily maintenance actions with appearance (showering, ironing your clothes, ect) you can now earn temporary reputation modifiers. Some you get from the sex minigame. Some negative ones you might get for vandalism. These modifiers however last 3 days rather than just one. Currently character specific reputation modifiers are unique, but non-character specific modifiers are not. So you accrue a hefty rep penalty if you deal drugs every day, showing Charlie the time of her life will only get you so far.

New Function: Mood Modifiers – There are some actions that can alter the mental state of a character (drugs) in the game now, and those states can last a few hours. These states can affect how some scenes may playout.

New Feature: Outfits – You can now buy outfits for the girls at the Boutique, if your skills are high enough. Gifting these outfits can give you access to variations of scenes.

New Topics, Items, and Clothing – Lot and lots as usual.

The intro scene at the beginning of the game – About damn time!

A new Animation – Only one. Still working on Gina’s mingame animations. sorry 😮

More Party/After Party Scenes – With mood modifiers added, there are some questionable choices you can make, to get some new party content, if you have access to certain pills. More to come 😮

Lot’s of Bugfixes – And probably added some new bugs in the process.

Some UI touchups – nothing huge worth mentioning here.

What’s it mean?
1 new AT for Gina : Self Explanitory

3 new Sub AT’s for Gina : It is now possible to revert Gina back to earlier AT’s of her, while maintaining any new permissions you may have earned. These Sub AT’s are SWB 4 star, Bartender 3 star, and Bartender 4 star. They operate just like her previous AT’s with those names, except you have more options now.

1 new AT for Becky : Self Explanitory

1 new AT for Diane : Self Explanitory

Sally’s first base AT : Self Explanitory

2 new AT’s for Jesse : Self Explanitory

1 new Job- Personal Trainer : The Fitness and Healthy skills have been updated to unlock this job, and improve your pay with it. Fitness 1 Unlocks the Gym, and Fitness 2 unlocks the job.

Dynamic Afterparty Event : Rather than the Friday night afterparty relying on Becky’s AT, now the results of the Afterparty are determined mostly by what you do during the night. If you spend all night dancing with Morgan, she may drag you off into the closet. The same goes for all the other girls. There’s also some specific content for Jay + Becky if you spread your time between them, and meet the lifestyle requirement.

New Mechanic- Travel Cost : Some places will now have a cost associated with traveling to the location. For Example…The bar takes half an hour to travel there, so to Travel to the bar I charge a little bit of stamina and 1 hour. Traveling home is free. I just make you pay upfront, so that you never get stranded. This also means some places may require Nathan to drive if he can get some keys, or ride the bus.

New Mechanic- Star Rating : This is the system that determines Nathan’s general permissions with a character. This is how You’ll be able to progress Gina to her Latest AT which has 4 stars (sex allowed), and then transform her back to SWB(4star) and still be able to have sex, even though you didn’t have permission to have sex with SWB Gina previously.

New Lifestyles: Sexuality , Order/Disorder, Dominance/Submission, Moral/Immoral all now have lifestyels that you can find on Nathan’s Skills page. Most of those skills have been updated, modified, and improved as well, with new Actions, Permanant Topics, and Embraced perks.

Stackable Topics – Your inventory will no longer be so cluttered 😀

Hotbar Toggle (TAB) – By pressing the TAB button, you can look at what you have loaded into your hotbar now.

New Wardrobe Panel: Stash – There’s a new storage panel in your wardrobe if you unlock it with Disorder Rank 2 for storing all your illegal goods in.

New Job: Drugdealer – A new job that requires Disorder rank 2. If you have items in your Stash, you can go and sell those items at a marked up rate. Only available at night in the Park.

New Location: Park – Self explanitory. You can visit the local park, and possibly run into people there…or possibly live a life of crime:eek:

New Gina Archetype: Hot and Bothered – Gina’s newest AT in her “Vanilla Path”

New Function: Lifestyles – Certain skills oppose each other, and now Nathan can embrace one to ignore the benefits, and drawbacks of the other. Each Lifestyle has a 2 week cooldown so don’t try to go all willy nilly with em.

New Lifestyle: Tidyness/Laziness – You can now choose to be a neat freak or slob…or just stay somewhere in between.

New Lifestyle: Healthy/Unhealthy – You can now choose to be a Health Nut or a Wastrel…or stay somewhere in between.

Skill Updates: Healthy, Unhealthy, Tidyness, Laziness – All of these skills have had minor tweaks to fit the new lifestyle system. Noteably Laziness, and Unhealthy have gotten some improvements, but only if you’ve embraced them. Gotta make those drawbacks worth it somehow 😀

New Skill: Sexuality – Currently just a placeholder. I wanted you to be able to gain the xp for this skill, for when the skill is actually fleshed out, but as is, it doesn’t do anything. There will be a lifestyle for this skill added in a near future update.

New Skill: Moral – Currently just a placeholder. I wanted you to be able to gain the xp for this skill, for when the skill is actually fleshed out, but as is, it doesn’t do anything. There will be a lifestyle for this skill added in a near future update.

New Skill: Immoral – Currently it’s mostly just a placeholder. I wanted you to be able to gain the xp for this skill, for when the skill is actually fleshed out, but as is, it doesn’t do much. There will be a lifestyle for this skill added in a near future update.

New Items – New clothes and other items to improve the Drugdealer job, and new perscription drugs that can be purchased from your local Lisa, given your embraced the unhealthy skill and have the correct rank.

New Topics – About 20 new topics all together.

New Animations – Charlie finally got her 4 animations for the sex mini-game, and Diane has got a new animation for her new AT.

Bar : Can be unlocked by progressing to Over Affectionate Gina or Cosmopolitan Diane
Charlies Bedroom : Unlocks when you Transform Charlie to Casual Fling

Sex Mini-game(Charlie only for now): More characters will get this type of scene as an option when thier AT’s allow for it.
Query Function in the inventory: You can now fill your empty hotbar with all the topics that have a specific tag with only a few clicks. Just empty your hotbar, and click on a topic to see the new button.
Multiple Save Slots: Now you can make bad decisions in three different flavors!
Primary Tags: Some tags have been labeled as Primary Tags. They visually look distinctive and are not hard to miss. Primary tags give a minor boost in conversations if the person you’re talking to is interested in that Primary tag. They also add all associated tags to the ban list if the primary tag is listed in a characters ban. So be mindful 🙂

Also too many to list. Hopefully you’ll notice the difference.

Loser v0.02.00
The amount of ArcheTypes in the game has gone from 4 to 11.
Number of characters has also increased.
New Skill : Photography has been added
Tons of new actions
A new character
2 new Locations
2 new online shops
Tons of new topics & items
3 new animations (with another on the way)
New Inventory Mechanic: Wardrobe for stuff you don’t need to carry around with you.
Much more…